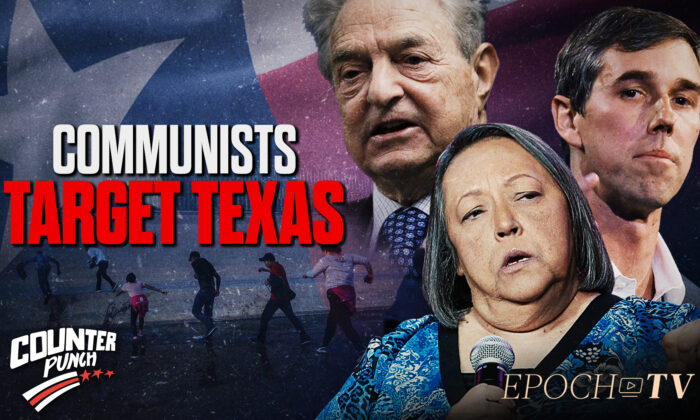 EpochTV Review: Texas in the Crosshairs of Communism

In the episode “Why Communists Are Focused Heavily on Turning Texas Blue,” “Counterpunch” host Trevor Loudon exposes the efforts of Democrats and communist organizations to turn Texas into a blue state. Historically Republican, if Texas turns blue it could essentially turn America into a one party country. The program begins with the announcement that Texas has become a hotbed of communist activity. Texas holds 38 electoral votes, which is why so much effort is being put into turning Texas into a blue state.

The host reveals that one of the main organizations trying to do this is called The Texas Organizing Project or TOP. This is a communist-run organization that has operations in other states with different names, but they are all controlled by the Communist Party. Organizations such as Detroit Action, Black Leaders Organization for Communities in Wisconsin, Pennsylvania Stands Up, the New Georgia Project, and the New Virginia Project are some of the communist organizations. These are all different heads of the same snake and are all affiliated with the main organization TOP, which is supported by the communist socialist organization Liberation Road. Its main objective is to get minority groups to vote Democrat.

TOP is the oldest, most organized, and the most dangerous of its kind says Loudon. The areas where it is most active are Dallas County in the Dallas-Fort Worth area, Harris County in Houston, and Bexar County in San Antonio. These areas are the three major population centers in Texas. TOP was originally called ACORN (Association of Community Organizations for Reform Now), which was exposed for voter fraud. So it just reinvented itself under a different name.

ACORN was founded in 1970 by community organizer, Wade Rathke. With an Anti-capitalist and socialist agenda, the group continued to grow and entered into politics in the 1980s. In 1998, it was found guilty of voter registration fraud. In addition to this, the founder’s brother, Dale Rathke was found guilty of embezzling over $1 million from ACORN, however the organization kept him on its board until he resigned in 2008. Out of the 1.3 million voter registrations obtained by the group in 2008, about 400,000 were found to be incomplete or frauds and in the following year, arrests were made due to leaders paying people for their voter registrations. Public outrage over these frauds continued to grow and the organization was disbanded in 2010.

The two founders of TOP, Ginny Goldman and Michelle Tremillo, were former leaders of ACORN. In 2016, TOP had a budget of $3 million and 40 staff members. By 2018, when they backed Beto for Texas Senate, it grew to 575 staff and knocked on over 300,00 doors. TOP has many leaders who are affiliated with the Communist Party, and they work to put people in public office who are TOP supporters.

The host outlines several of the key players at TOP and their affiliations. San Antonio native Rosie Castro serves on the board of TOP and she worked with the Communist Party USA in the 1970s. Her sons, Joaquin and Julian Castro are both heavily involved in TOP. They both attended Stanford University and became presidents of the student government running on the people’s platform, which had ties to communism. Also on the board of TOP is a man named Bernard Sampson who is the head of the Houston Communist Party. Houston is the headquarters for the Texas Communist Party with over 300 members, several of whom are involved in TOP. Reverend James Caldwell and many other reverends are members of TOP and are Communist Party members.

In 2014, the Communist Party and TOP campaigned to get Sylvia Garcia elected as a Texas representative. She is now in Congress and remains very loyal to TOP. In 2020, she endorsed Penny Shore as a Texas state representative for the Democratic Party. Penny Shore is a card carrying member of the Houston Communist Party. With the help of TOP, she was elected to that position. The Texas Organizing Project was also instrumental in getting Houston’s left-wing mayor Sylvester Turner elected into office and Dallas’ Colin Allred to Congress. Allred has ties to the Democratic Socialists of America and Battleground Texas. These organizations work together to get each others elected to legislative positions. The Communist Party is pro-China and it is alarming that most of the voter registration centers are run by Communist Liberation Road.

Battleground Texas was founded in 2013 by Texas Democrats seeking to turn Texas into a state where Democrats could compete equally with Republicans in elections. Jeremy Bird, the group’s senior advisor served as director for Obama’s 2012 campaign. On their website is a disturbing quote that says, “Battleground Texas is a local effort with national implications. With our 38 electoral votes, once Texas goes blue, a Republican can never make it to the White House again.” With a statement such as this, the objective of this movement is clear.

These organizations believe they can use the minority populations to achieve their takeover of political positions. The host states, “That may seem a little far-fetched, but it was far-fetched five years ago when Virginia was going to flip. It seemed far-fetched a few years ago that Georgia would have two far left Democratic Senators and that Arizona would be in a similar situation. The communists are working overtime to flip Texas because Texas is the prize. If they can take Texas, then they have America.” The immigrants that are pouring into Texas are being given the right to vote by Biden and they will primarily vote Democrat.

The host advises that the only way to save Texas is to shut these communist networks down. With all of these people in various organizations tied to the Communist Party, it is clear that we are in danger of being overtaken and assimilated into a socialist country if things continue the way they are. We need top officials who will investigate these organizations, otherwise our state and then our country will be lost. It is worth the effort—and taking some flak—to get this accomplished. Saving Texas is a big part of saving America and Western civilization.

“Counterpunch” premiers every Wed and Saturday—exclusive on EpochTV.