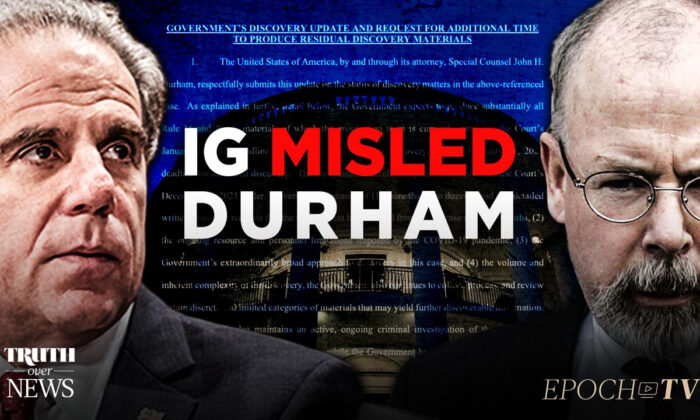 In this episode of Truth Over News, “IG Who Reviewed Clinton Emails, FBI Investigations, and FISA Warrants Concealed Information From Durham” delves into the Durham investigation, the FBI Crossfire Hurricane investigation, and the report released on Carter Page.

The video begins with the new filings released by special counsel John Durham, which reveal that the inspector general of the Department of Justice failed to disclose information in several critical investigations.

This investigation was opened by the FBI in 2016 to investigate alleged links between Russia and Trump officials in Donald Trump’s presidential campaign.

John Durham was appointed to handle a parallel investigation into the FBI’s origins of that investigation. This bears great importance because if the FBI did not have a legitimate reason to open the investigation, they would be guilty of interfering in a presidential campaign.

It was found that Inspector General Michael Horowitz held back vital information from Durham during his investigation, namely two cell phones used by James Baker, a former FBI counsel. These phones held important information about the Michael Sussmann investigation and a criminal leak investigation of James Baker by Durham.

The lack of disclosure by Horowitz raises serious doubts about the conclusions drawn about the FBI investigation, the Clinton email inquiries, and the FISA warrants on Carter Page.

The host goes on the explain that Horowitz released reports about the Crossfire Hurricane investigation and the foreign intelligence surveillance act warrant served on Carter Page who was one of Trump’s campaign aides.

Even though there were many violations and omissions found in the FBI warrants, the report by Horowitz stated that the FBI had valid reasons to open their investigation of collusion between Russia and Trump.

When Durham released the report from his investigation, it stated that they did not agree with the inspector general’s conclusions. It has been surmised that the inspector general having limited resources of his own department, might have come to the wrong conclusions; however, this does not explain why he would just not have left that out of the report if there was any question of the information used by the FBI to open the investigation.

Michael Sussmann is an attorney based in Washington D.C. who was indicted by a federal grand jury as a result of findings in the Durham probe revealing that he provided false information to the FBI in their investigation of Trump.

The new report by Durham raises questions about Horowitz’s lack of disclosure and his conclusions and motivations. During the investigation into Sussmann, Durham and his people met with Michael Horowitz and requested any information or documents that his office might possess. He gave information that Sussmann had provided information that a computer belonging to an employee of the Office of the Inspector General was seen on the public internet connecting to a private connection in a foreign country.

Horowitz’s office stated that they did not have further information on Sussmann, however, Sussmann’s attorneys informed Durham that Sussmann had met with Horowitz in 2017 to personally give information about the computer and VPN use.

Horowitz himself did not disclose this information, furthermore, Sussmann’s attorneys said that the information came from Rodney Jaffe, another computer expert with ties to the FBI. Jaffe allegedly provided Sussmann with false information regarding contacts between Trump and Russia’s Alfa Bank. This information was also used by Hillary Clinton in her campaign to smear Trump. It was also said that subsequently, Jaffe was offered a high-ranking position in the Clinton campaign.

The two cell phones owned by James Baker held information about Sussmann’s lies to the FBI about Trump and Russia. This information would have been critical to Durham’s investigation but was withheld by Horowitz.

Baker had also been the subject of an investigation by Durham regarding leaks to the media when Durham was the U.S. attorney for the District of Connecticut. All these instances of Horowitz withholding information from Durham raise a number of questions on different investigations. These include:

In the next segment, the host advises that Horowitz’s reports have been described as “limited hangouts”. The host defines the surprising meaning of this term and states, “In order to withhold or cover up more damaging aspects of a political scandal, it is sometimes expedient to admit to some of the truth in the expectation that the public will be distracted by what has been revealed and move on without knowing or understanding the more important or larger aspects of the issue.”

Whether or not this was the intended outcome by Horowitz, it definitely had that effect. Democrats were happy that no bias had been found in the FBI investigation and Republicans were happy at the errors that were disclosed.

Horowitz said that the FBI Trump/Russia investigation was due to a tip provided by an Australian diplomat, but this was never substantiated. Despite all of this, only one person was indicted and only got probation even though he provided erroneous information that sparked the Carter Page warrants.

The video concludes with the host revealing that it has been suspected that the FBI started their Trump investigation long before it was formally opened, and they had already started an investigation on Carter Page. Dossier author, Christopher Steele verified this and revealed that reports were already circulating in the FBI and high levels of our nation’s capital.

The FBI continued to add Trump campaign officials to its list of investigations. The extent of Horowitz’s involvement in all of these cases has not been determined as of yet, but it is clear that he withheld vital information intentionally from Durham.

Horowitz’s job as the Inspector General of the Department of Justice is to watch the watchmen. With the information that we now know about him, it raises the question, “Who is watching him?”

“Truth Over News” premiers every Tues and Thurs at 6 p.m.—exclusive on EpochTV.