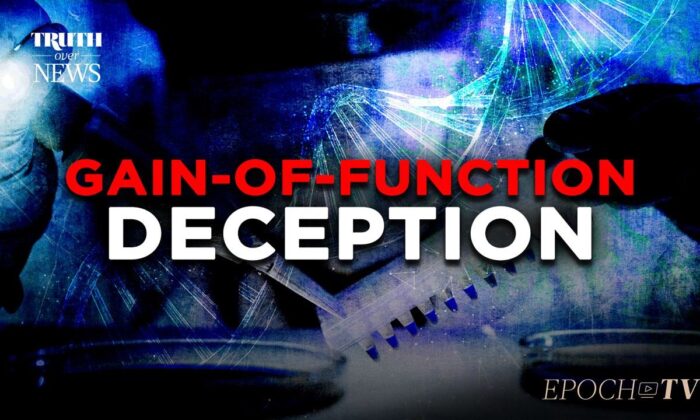 Join Jeff Carlson and Hans Mahncke in the latest episode of “Truth Over News” as they expose the latest news relating to Anthony Fauci’s connection to funding dangerous research in the Wuhan Institute of Virology that led to the outbreak of the Coronavirus pandemic.

After nearly two years of denials, Fauci’s organization, the National Institutes of Health, has finally admitted that it did in fact fund gain-of-function experiments at the Wuhan Institute of Virology. Although the NIH claims that the viruses it experimented on were too genetically distant to have caused COVID-19, IT failed to tell Congress that Peter Daszak, the person through whom Fauci funded the Wuhan lab, had kept a large number of unknown viruses in his possession and that only he, his researchers, and maybe the NIH knows what he did with those viruses or how close to COVID-19 they are. The NIH also conveniently edited its website to redefine what gain-of-function research means as they were making these admissions.

The NIH Principal Deputy Director, Lawrence A. Tabak, issued a disclosure saying that despite the NIH’s insistent denials, it had in fact funded gain-of-function experiments at the Wuhan Institute. He wrote this in response to congressional inquiries, issuing a letter which went directly against previous claims by the NIH Director and Fauci. Tabak also acknowledged that Daszak’s organization, the EcoHealth Alliance, which acted as the body through which Fauci funded the Wuhan lab, violated the terms and conditions of the NIH grant. Despite this, the NIH was still aware of the data from EcoHealth being reported in its annual progress reports. These reports should have alerted the NIH to the fact that NIH money was being used to conduct and move forward with dangerous gain-of-function experiments at the Wuhan lab.

The EcoHealth Alliance failed to submit their required final report, which should have been provided to NIH in 2019. The content of the report—recently turned over after a two-year delay—details how EcoHealth and Wuhan Institute of Virology had constructed a new laboratory-created coronavirus that showed a 10,000 fold higher viral load, along with higher pathogenicity than the original virus. These results were obtained from testing the newly created virus on humanized mice, which are mice adapted to carry functioning human genes and tissue, and are useful to test whether a new virus is capable of infection and transmission in humans. Tabak’s letter to Congress stated that Daszak’s experiments did not require strict oversight by NIH because the bat coronaviruses that were originally cited in Daszak’s work were not yet shown to infect humans. However, one of the viruses tested by Daszak, the WIV1-SHC014-Cov, was a lab created virus that exhibited high lethality on the humanized mice. According to the belatedly submitted progress report, 75 percent of the humanized mice infected with the lab-created virus died.

Just because the experiments were not directly tested on humans does not mean that the NIH was unaware of the potential threat these experiments posed to humans. On the same day that Tabak wrote his letter, the NIH quietly removed its longstanding definition of gain-of-function experiments from its website, which had previously noted that any gain-of-function research intended to “enhance the transmissibility and/or virulence of potential pandemic pathogens, which are likely to make them more dangerous to humans has been the subject of substantial scrutiny and deliberation” and could only be conducted with “appropriate biosafety and biosecurity controls.” The new definition changes the wording to switch the focus from potential transmissibility to humans, to known and established transmission instead. This new definition senselessly allows Fauci-funded research by EcoHealth to not be under strict oversight by NIH.

This new definition also allows many statements made by Fauci and other health authorities in recent months to be technically correct, in that the NIH and NIAID funds did not directly support gain-of-function research that would have increased the transmissibility or lethality for humans, because the definition now leaves out mention of the potential of such research.

The NIH published a statement on the same day Tabak’s letter was sent to Congress saying that the research they funded at the Wuhan Institute of Virology was not close enough to be able to infect humans, but what they failed to mention is that this assertion is simply unknowable. In 2018, Daszak had submitted a proposal laying out his plans with the Wuhan Institute of Virology to create synthetic coronaviruses and to insert human specific cleavage sites to make those viruses more infectious. The proposal essentially provided a blueprint for making COVID-19. As part of this proposal, Daszak acknowledged that EcoHealth had in their possession a collection of 180 unique SARs Coronaviruses and these viruses had never been publicly shared. It is impossible for NIH to make definitive conclusions about what exactly EcoHealth did with its money because EcoHealth withheld data and information about such studies.

This fact has been implicitly acknowledged in Tabak’s letter to Congress, where he admitted that EcoHealth had not fulfilled its duties to the NIH grant. The NIH denied it was funding gain-of-function experiments until it finally admitted it was doing exactly that. The institution then failed to hold EcoHealth accountable for requirements that the NIH themselves had imposed. The NIH knew Peter Daszak had potentially lethal viruses in his possession, which he had not shared with the wider scientific community as required by the NIH grant, and the NIH had no proof that Daszak had engaged in proper handling or containment of those unknown, lethal viruses. The NIH has known for years what EcoHealth and the Wuhan lab were doing, but no one stepped in to question or stop the experiments from happening, instead the money continued to flow.

Watch the full episode for more information and share this article to help uncover the truth about the COVID-19 pandemic.