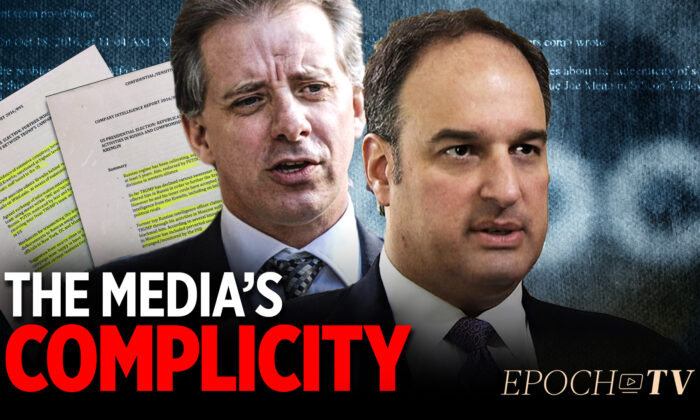 “Emails Reveal How Media Collusion in Steele Dossier Efforts” exposes recent findings that reveal collaboration between the media and former Clinton campaign operatives during the 2016 election run-up. Hosts Jeff Carlson and Hans Mahncke conduct an in-depth look into these revelations in this episode of Truth Over News. The video begins with a news clip of Hillary Clinton in a press conference announcing that former President Donald Trump should reveal all of his ties to the Kremlin and its associates. The host follows this with the information that recent court findings show just how involved these Clinton campaign operatives were in creating and promoting these false claims that Trump was in collusion with Russia in his election campaign.

Clinton campaign lawyer Michael Sussman was recently indicted for his role in giving erroneous information regarding this to the FBI. Recent discovery of several emails show the close relationship between these operatives and several prominent reporters in the media. Fusion GPS, a research and intelligence firm based in Washington D.C. which was connected to the Clinton campaign, encouraged the media to run with stories that promoted the Trump–Russia conspiracy. This ongoing litigation is between Alpha Bank, Christopher Steele, Fusion GPS, and Michael Sussman. Alpha Bank is a prominent bank in Russia that was accused of being the channel between Donald Trump and Vladimir Putin. This bank is suing Fusion GPS and others who made up a false data trail which made it appear that the Trump organization was communicating with Alpha Bank. The first of these false communications were provided to the FBI by Michael Sussman in 2016 in an attempt to get the agency to open an investigation. He was indicted by John Durham as a part of his probe into these fabrications. Even though the FBI debunked the claims, the Clinton operatives continued to push the issue. The FBI’s refusal to share information with the public that the claims had been debunked and continued efforts by the media resulted in a costly investigation of the Trump administration that spanned several years.

Newly released email communications from Alpha Bank litigation named several media personalities known for their promotion of the Russia/Trump conspiracy story. The list of these media people include:

These emails address the false allegations that Trump, Alpha Bank, and Vladimir Putin were working together. Fusion GPS continued to insist that the media keep publishing these allegations right up until the close of the 2016 election.

Another person involved in giving misleading information to the FBI about Trump and Russia is Christopher Steele. A former British spy, Steele was hired by Fusion GPS to write a secret dossier on Trump which helped spark the FBI investigation. He has continued to defend the dossier, and said in a report to ABC News, “I stand by the work we did, the sources we had, and the professionalism that was applied to it.” In addition, another major media player is Mark Hosenball with Reuters, who was commanded by the co-owner of Fusion GPS, Peter Fritsch, to do the Alpha Bank story. Hosenball readily agreed but expressed concern that the data was unable to be verified by cyber experts at Reuters. Fritsch replied to these concerns by advising Hosenball to contact IT specialist, David Dagan at Georgia Tech. Dagan, who is an associate of Rodney Joffe, and both of these individuals were named in the John Durham probe. The emails that were released in the Alpha Bank litigation named many Clinton operatives and reporters in the mainstream media responsible for continuing to promote this story. Including Franklin Foer who sent an email to Peter Fritsch expressing the need for an aggressive and fast push of the conspiracy between Trump, Alpha Bank, and the Kremlin while Michael Sussman pushed it to the FBI and New York Times.

Another aspect of this media feeding frenzy was the interview with Sergei Millian which was promoted by Matthew Mosk of ABC News. Millian is an American realtor who previously sold properties to Trump. Originally from Belarus, Millian was marked as a target by Clinton operatives who would assist them in promoting the Russia conspiracy story. Christopher Steele falsely identified Millian as a fictitious source for his dossier even though Millian had never been connected with Steele or any of his operatives. Fusion GPS worked with mainstream media reporters to get damaging footage of Millian talking about real estate deals between the United States and Russia involving Trump properties and Russian nationals. This interview was never intended to be broadcast and was not aired, but the footage was leaked by Fusion GPS to the Clinton campaign who used it in one of their ads. The footage they used was Millian answering a question about an unrelated matter but was edited to make it appear that Trump was doing business with Russia that was not on the up and up. Millian has since been cleared of all charges by the Inspector General, and Steele’s main source of information readily admitted that he had never even met Millian.

Many emails sent by Fritsch of Fusion GPS to people of news media outlets demonstrate the closeness of the relationships between Fusion GPS and the media. Many of the emails had subject lines that read “Look” or “This is huge” and included zip files that contained information as well as other sources of information on the Russia narrative. The video ends with the host stating, “As the Alpha Bank case and Durham’s investigations proceed, we are continuing to discover just how deep the Clinton campaign’s role in orchestrating the Russia collusion hoax went. Of equal importance, these latest email releases prove beyond any reasonable doubt that many in the corporate media were intimately involved with perpetrating that hoax on the American people.” He also explains how these relationships between Fusion GPS and the corporate media demonstrate the biases that exist in our new organizations the perpetrate the divided state of our country.