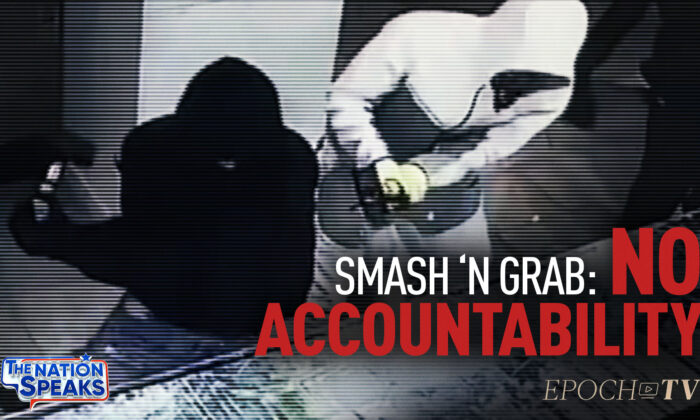 In this episode of The Nation Speaks titled, “The Truth Behind California’s Looting Spree; Airport Security Report Card,” host Cindy Drukier explores what is behind the bizarre string of looters raiding luxury stores and then takes a look at the TSA’s successes and failures within the last 20 years.

The video begins with a news clip of a gang of hammer-wielding looters rushing out of a store with arms full of stolen merchandise. Drukier informs us that four of these organized looting and robbery sprees were committed in just one weekend. The stores hit were Louis Vuitton, Burberry, a jewelry store, and Nordstrom. The stores were ransacked, and the stolen merchandise was loaded into a fleet of waiting getaway cars. This has devastating effects on the retail industry. For example, Walgreens was forced to close 10 stores within the last two years in the San Francisco area with plans to close another five. A Walgreens spokesperson reported the chain spent 46 times more on security for their San Francisco stores than the rest of their stores nationwide.

The host welcomes Wilford Reilly, an author and professor of political science at Kentucky State University. She asks him to share his opinion on why this is happening. He replies that this is an example of policy impacting results. In 2014, California reclassified several crimes as misdemeanors, which were previously felonies. Retail theft was one of these crimes with a monetary cut off of $950. Reilly states that in California a group of looters are going into a store like Walgreens and stealing $949 worth of merchandise, knowing it is hard to be prosecuted for a Class B misdemeanor in a large urban area. He says that the idealistic view of society is that crime exists because the criminal justice system is unjust. By making it harder to send young minorities to prison for their crimes and having social work and training as an alternative, crime will be reduced. However, making crime less punishable does not reduce crime, because there are always people with evil intentions, and this crosses all races and economic boundaries. Another fallacy of avoiding prison is the idea that it will reduce the revolving door problem where people commit crimes, go to prison, get out, and then are unemployable so they commit another crime, which puts them back in jail. While job training programs are good, what ends up happening is that the criminal is still free in society and will most likely offend again. He states, “When you let the wolves back onto the streets, it’s hard times for the sheep.” Something has to be done to protect innocent people from falling victim to these predators. There is example after example of crimes that were committed by people who were out on bail and their crimes could have been avoided if they had been kept in jail.

The host then asks Reilly about the low percentage of theft crimes that are prosecuted in the state. He states that when the crime is reclassified as a misdemeanor instead of a felony, and no arrests are even made if the amount stolen is under $1000, most businesses do not even report those crimes. Nothing good can come from making crime harder to prosecute. Drukier asks him to weigh in on whether people are becoming aware of this problem. He responds by saying he believes that we are seeing a trend back to a more traditional treatment of crime.

In the next segment, the TSA (Transportation Security Administration), which is only 20 years in operation, is examined. Things used to be quick and easy before the 9/11 attacks, but now processes are much more lengthy. To answer the question of how secure our airports really are, the host welcomes Jeff Price, a trainer and author of airport security. While airport security measures are much better since 9/11, there are other threats that we are not necessarily prepared for. Price says that everything about airport security has changed including the TSA, which was not even an agency until after 9/11. Updated screening and technology have been created by the TSA including screening checked baggage, which had never been checked before. Also, more stringent background checks for airline employees as well as charter operations have been implemented. He also states that while security is much better now, there will always be room for improvement. The host then asks Price to detail the threats that we need to be on the lookout for. The three top threats he lists are: cyber, drones, and insider threats. Insider threats come from those who work in the industry assisting those who commit the attacks. They have always been present, but sometimes there are gaps in the information available. For example, knowing whether a person has been radicalized. Price states it is sometimes difficult to identify these individuals, especially those already working in the industry.

Airports and airlines overseas have recently seen attacks by drones rigged with explosives, and this is something we could see here especially with aircraft flying at lower altitudes. The TSA now has airlines include cyber experts as part of their security personnel. Cyber threats would include stealing personal information from airline reservation systems, and rearranging flight information, which would cause backlogs and flight delays. Such delays cost the airlines a great deal of money and keep some passengers from getting where they need to go. The worst case scenario of a cyber attack would be if someone hacks into the security system or air traffic systems to cause an incident. He also states that the traditional threats of bombing and hijacking are still relevant today and could very well still happen. Another area of security that needs to be stepped up is that of public area security. While a lot of security is aimed at the aircraft, security within the airport itself needs to be increased. Airport management handles its own security; it is not regulated by the TSA.

The video concludes with the host questioning Price about the things he would like to see changed. He mentions better security for public areas and drone security. These measures will hopefully close the gaps in security that have the potential to cause more threats in the future, and make air travel even more safe for employees and passengers alike.

“The Nation Speaks” premiers every Saturday at 4 p.m.—exclusive on EpochTV.