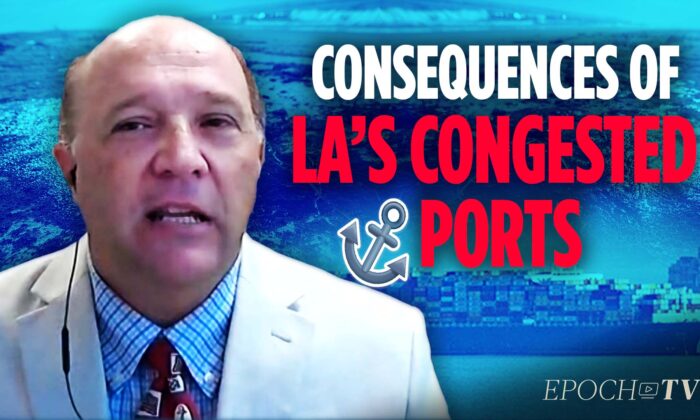 Siyamak Khorrami, host of  “California Insider,” talks to Dr. Salvatore Mercoglinao in this episode called “Delays, High Prices, and Shortages: The Consequences of Los Angeles’s Congested Ports.” Mercogliano is a professor of Maritime Industry Policy at the U.S. Merchant Marine Academy, and professor of History at Campbell University. They discuss how the current backlog at the port of Los Angeles and Long Beach will affect consumers—especially during the upcoming holiday season.

The program begins with a report on the number of ships currently waiting in the ports. This has already caused one oil spill, as there are an estimated 70 ships with as many as half a million containers that need to be offloaded. Mercogliano explains that the backlogs have happened in the past, but this backlog—which began from the beginning of the pandemic—is showing record-breaking numbers. Prior to COVID-19, there was already a slow-down of goods coming from China. Also, ships were coming in half full. Now with an increased demand for goods, the backlog of ships continues to create more and more demand.

There is also a shortage of truck drivers to deliver the goods once they are offloaded as well as a long wait time for goods to be loaded onto rail cars to move them. “Our system had not been tested to this level. We were operating on what is called just-in-time logistics,” he said. An example is when a consumer orders something from a site like Amazon, there is an algorithm in place that determines how quickly the order is shipped out once ordered, which is usually within one or two days. What we are seeing now is a strain on the system because of the increased demand for goods, which has not been experienced since World War II. This is due in large part to people shopping online instead of going to stores.

The next question from the host deals with how this backlog affects prices passed on to the consumer. Marcogliano advises that normally it costs $1,500 to ship a container. The cost of the shipping is divided out and added to the price of the goods. Now the cost of shipping a container has increased ten fold, which increases the cost of the goods. He gives the example of the sale of sneakers. The average cost to ship a pair of sneakers was 12 cents. This has increased to 1.20, which along with increased demand drives up the price of the sneakers. He said shipping costs will probably not fall again to the levels they were pre-COVID-19, which is going to create a situation of ongoing inflation.

In addition, the concept of oceanic shipping requires that ships keep moving—which is how they make their money. When there are backlogs like we are experiencing now, the ships are anchored and burning fuel—they are unable to drop their loads and return for another load. While waiting to be loaded onto a truck or train, a rental fee is charged to store the container, which gets higher the longer it stays on the dock. Incurring these costs increases the freight rate, which drives up the overall shipping cost. A merchant can request expedited shipping but that costs extra. All of these things have to be taken into consideration when determining the cost of the goods, which is passed on to the consumer.

There’s another reason for the transport delays at these ports and that is the shortage of chassis. The chassis is the frame on the back of the truck where the containers sit. There is now an increased demand for these, making it very difficult to get them. As a result, when the truck driver shows up to the dock, there is no chassis to pull the container. According to Marcogliano, these factors are going to affect the economy in a couple of different ways. First of all, while we are not going to run out of goods, what we are going to see is less of a selection than we had before. The other factor is inflation due to the increased demand and decreased supply.

The host then asks how this issue can be resolved. Marcogliano outlines some possible solutions:

The advice given to consumers is to plan purchases more in advance. We are not going to see expedited shipping as before, so buying earlier and giving more time to receive goods is prudent. When manufacturers have to wait on parts, this can cause production delays and lead to layoffs. He said, “What I think we will see is people start building up more goods, which means we will not have as much disposable income because we will be investing it more in stock than we usually do.” Marcogliano says he hopes that we will bring more manufacturing back to the United States. But the concern is that as long as it is cheaper to manufacture overseas and have the goods shipped over, we will leave it overseas.

The program ends with Marcogliano talking about the shutdowns that are happening because of COVID-19. One thing that did not shut down was international shipping. Many of the workers that work in this industry come from economically disadvantaged areas. During the pandemic, many countries did not allow workers to get off the ships, so mariners stayed on the ships for much longer than normal—sometimes for over a year. The consequences of this are more accidents happening and many workers will not return to work once they are able to get off the ship, leading to a shortage of workers in the maritime shipping industry. That along with production slowdowns in China could potentially mean that instead of backlogs of ships, no ships would arrive with goods. It is this scenario that would be the most disastrous.

Consumers should take measures now to prepare themselves for these disruptions, which will likely continue in the foreseeable future.