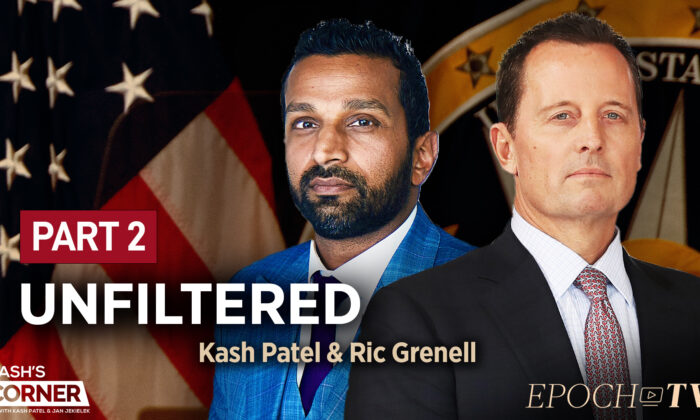 In the second installment of Kash’s Corner, “Kash Patel and Richard Grenell Part 2: Durham Probe, Hostage Return, and Fixing California,” the host and guest discuss three important issues. The video begins with the host asking Grenell if he had wanted to be the head of National Intelligence before President Donald Trump selected him. He responds by saying that was not his intent but having spent 11 years with the State Department and caring a great deal about it, his expertise made him a good candidate for the position when Trump appointed him. He moved from Germany, where he was serving as an ambassador, to the United States.

He then shares how he grew up in a Christian home and was taught the importance of supporting and protecting Israel. He commended former President Trump for his support of Israel, his belief in Biblical principles, and his sensitivity to religious liberties. The host then asks about his involvement in the release of Pastor Andrew Brunson who was serving prison time in Turkey after being accused of spying. Grenell relates how when Trump heard about the situation, he immediately began to take steps to facilitate the release of the pastor. He brings up the excellent point that Brunson’s situation went beyond his own individual experience and represented the religious liberties of all people. The host asks Grenell about his experience in seeing Brunson’s release. Grenell says he was still in Germany, and drove all night to Ramstad to meet Brunson’s flight. He met the flight and watched as the pastor walked down the steps of the exit ramp of the plane. It was an emotionally charged moment as Grenell realized the gravity of what this meant for religious liberties. As Grenell describes this moment, a picture is shown of Brunson as he came down the steps and kissed a folded American flag that Grenell gave to him.

The host reveals that Trump was responsible for facilitating the release of over 50 hostages who were wrongly imprisoned and asks about the role that intelligence plays in these situations. Grenell explains what intelligence is and the quality of intelligence that he experienced. He states, “Intelligence is an estimate. It is not an exact science. It’s what we believe, or some people believe about a situation.” The aim is to present this information to officials who then make good decisions based on the information they receive. He reveals that there is a problem with intelligence officials leaking information that is unverified and is classified. It is not only against the law to do this, but it also affects the safety of our nation.

There are 17 agencies that reported to Grenell, and his role was to review the information that came in and use it in different situations. He states that in his position he realized that not all of the information that was being gathered was of bad quality, and that it needs to stop being politicized and be based on fact. An example of this is when he worked with the Israel team. He was told that if they moved the U.S. embassy from Tel Aviv to Jerusalem, it would result in World War III. This of course was not the case and Trump was wise enough not to believe this, because he had other information to the contrary. The embassy was moved to Jerusalem and actually helped our relations in the Middle East.

Grenell said if he had stayed in his position, his next project was to reform the Russia team, which is highly politicized right now. The media too often takes information that is just an estimate as actual fact. They will accuse people who attempt this reform of manipulating intelligence and facts. The position requires someone who can resist this type of rhetoric and not let it influence decisions.

Another example of how the intelligence agencies need to do a better job is 9/11. The question has been raised of how our intelligence agencies missed the information that this was going to happen. Grenell explains that all of the agencies had different estimates or little pieces of information, but they did not communicate with each other and therefore the bigger picture was missed. The solution that former President George W. Bush came up with—to make sure that this did not happen again—was to create Homeland Security. Grenell feels that the office of the Director of National Intelligence has grown too big and is too competitive in nature. Its original purpose was to ensure that all of the agencies communicated and coordinated with each other and shared information. When Grenell tried to coordinate with people on his reform package, he was met with resistance and they refused to communicate with him. Then some agencies went to the media and said that he would not coordinate with them, and he was criticized—but none of that was true.

Patel points out that during his tenure, a lot of information was declassified properly and for the first time American citizens had true facts that had never been released before. He remembers the people who stayed steadfast in their belief that releasing this information would not have a negative effect, but instead would increase confidence in our intelligence—and we have the right to know this information. Washington does not want to be transparent, because it wants the American people to get the information from sources that they control, so therefore anyone who tries to share the truth is met with resistance.

The host then asks his guest about one of the most important tasks of his job—the presidential daily briefing. The president is given information from all of the intelligence agencies. Grenell said Trump focused on issues that were priorities not just issues that officials thought were important.

In the next segment of the video, the host asks Grenell to talk about the plot against Trump and the Durham probe into the Russia investigation. He responds that he is frustrated with the amount of time that investigation is taking and states, “Justice that is not swift is not justice.” He stated that he firmly believes the whole phony narrative and investigation was done by the FBI and Department of Justice and not the Democratic lawyer who is now in custody. The host and his guest agree that the Russia investigation was a lie conjured up by the Democrats to try and discredit Trump so that he would not be able to run again for president. It was also a way to distract us from what is going on in China. The host states, “It is going to come back and bite them because it’s going to show how much of a corrupt and fraud DOJ and FBI we had.”

The interview concludes with the host and his guest discussing California. Grenell is involved in several initiatives for the state, where he resides with his family. He has a lot of pride in his state but explains that recent losses in congressional seats have had a negative impact on the state and many people are moving out of California. He lists several things that are being done to improve things which include:

· Improving voter integrity by making sure that those who are on the voter rolls are there legally.
· DataPlay analysis to find conservative voters who do not vote or are not registered to vote.
·  In 2022 an education initiative was put on the ballot for voters to choose how education funds are allotted. This would allow parents to choose either public school or private school for their children to attend and would be paid for by the state.

The Fix California initiative which is an initiative to improve election integrity with voters, focuses on better education and responsible environmental and energy policies. It is being done in both the Democratic and Republican parties. These education improvements will help children in our country be able to compete with other nations in the technology industry. More information can be found on these initiatives by visiting www.fixcalifornia.com