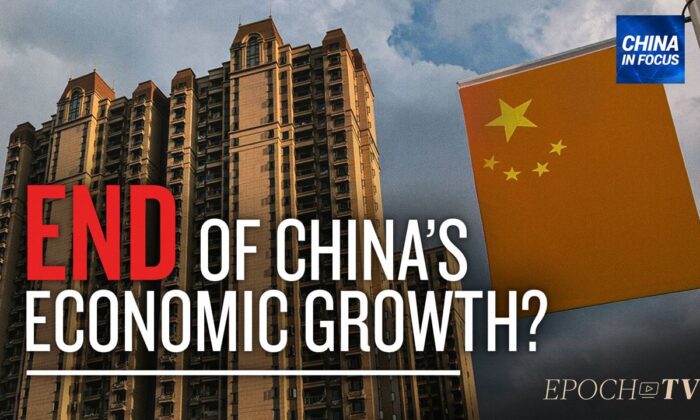 In the latest episode of “China in Focus,” Tiffany Meier examines the economic crisis in China real estate, and whether the Communist Party of China’s economy is truly as prosperous as the world has been led to believe.

Chinese real estate developer Evergrande is collapsing, but its problems are just the tip of the iceberg. Chinese real estate is in deep trouble. What ugly truth is the Evergrande situation exposing about China’s allegedly booming economy? Does China have the ability to keep its former growth going or furthermore, to prevent an economic crisis? What does an at-risk economy mean for the ruling Chinese Communist Party? In this special report, Meier looks at how far this economic domino effect could go, and what Beijing still has left up its sleeve that will convince the Chinese people to ignore widespread issues and human rights abuses in order to preserve the economy.

Over the past few weeks, Evergrande’s investors have been surrounding the company headquarters demanding their money back. Evergrande is the second largest real estate developer in the country and is currently drawing in more than $300 billion of debt. This sum is more than South Africa’s entire GDP and Russia’s entire national debt. Of their investors, $19 billion came from international bond holders. This holds extra concern for those investors because offshore debt is known to have less chance of being paid back than on shore debt. Evergrande reportedly owes money to hundreds of banks and financial firms. In addition to this, the company has sold houses that haven’t even been built yet, meaning that if the company goes under, those houses will never be built and the people who paid for them will never see those savings again. Evergrande also directly employs over 200,000 people and provides work for about 4 million.

As of September, 274 real estate companies in China have filed for bankruptcy. Real estate is a $5 trillion sector in China and for the past two decades China has relied on real estate to fuel a large portion of its economy. Real estate in China makes up 30 percent of its entire economy. This is concerning when compared to real estate making up just 9 percent of the economy in Japan in the 1990s before the country’s housing bubble burst, and just 6 percent in the United States right before the 2008 mortgage crisis that triggered a global financial disaster. Chinese housing prices have risen to extremely high levels in recent years. An average person would need to work for 20 years in order to save enough to afford an apartment in certain cities, and only if they also did not spend any money on food, water, or anything else in order to achieve this goal.

How did this all begin? The media and Wall Street say the Chinese economy is booming, and it could overtake the U.S. economy by 2028. It is true that the Chinese economy has grown since 2001 when it joined the World Trade Organization. With the help of cheap labor costs and foreign investment, China’s exports grew by nearly 25 percent per year, leading to continued economic growth. There have been two main booms in the Chinese economy: the export boom and the construction boom. Experts say that these booms cannot be replicated, meaning that the events that spurred economic growth in China over the last 20 years were one-time occurrences and are not sustainable forever.

As a result of the export boom, wages rose, and with the financial crisis of 2008, foreign investments withdrew. This led to the decline of the export boom around 2012 and by 2016 China’s exports fell by 7.7 percent. To counter the dwindling export market, real estate came to the rescue, with China starting its “borrow and build” model of economic growth, driven not only by houses, but by roads, bridges, and other essential and nonessential infrastructure. In less than 10 years, real estate became the pillar of the Chinese economy and drove dozens of booms in other industries as well.

The CCP relies on the economy in order to claim legitimacy and distract people from other issues like human rights abuses. With real estate being the pillar of the Chinese economy, China’s infrastructure may look like a symbol to the world of prosperity, but the reality is that these buildings are the result of local governments’ massive lending and over investing. In a normal economy, it should take decades to build what China was able to build in just 10 years. This borrow and build method is proving to be unsustainable, and also has serious negative consequences.

Local government branches in China now have an over reliance on real estate and their mounting debt is increasingly becoming an issue. In China, property rights differ from those in most countries, with no one allowed to own or purchase land and instead all land is owned by the regime. The government relies on selling land use rights, making up to 56 percent of their revenue on land use sales in some areas. A declining housing market means developers won’t pay local governments as much for land use rights, posing a threat to income streams in cities and local governments that are already sinking in debt. Evergrande may be the first big company to collapse, but it won’t be the last. In addition to this, the CCP regime has buckled down on allowing companies to borrow, among other restrictions that affect jobs and businesses’ ability to stay afloat.

Will people keep serving the CCP and accept the human rights violations while also suffering extreme poverty? The episode also covers foreign policy developments and human rights violations that are drawing world leaders’ attention. The Covid-19 protocols are heightening in China, leading to other restrictive rules that have negatively impacted citizens. Some citizens talk about their experience being in lockdown in Wuhan with no access to the outside world, and the lengths people have to go to to see other information and break through the government censorship. From the collapsing real estate market, to the domino effect on the economy as a whole, will the Chinese people and the CCP regime finally have to come to terms with the detrimental communist policies that created the problems they now face?

Watch the full episode for an in depth look at these important issues, and share this article to spread real news that matters.

“China In Focus” premiers every Friday at 9 p.m.—exclusive on EpochTV