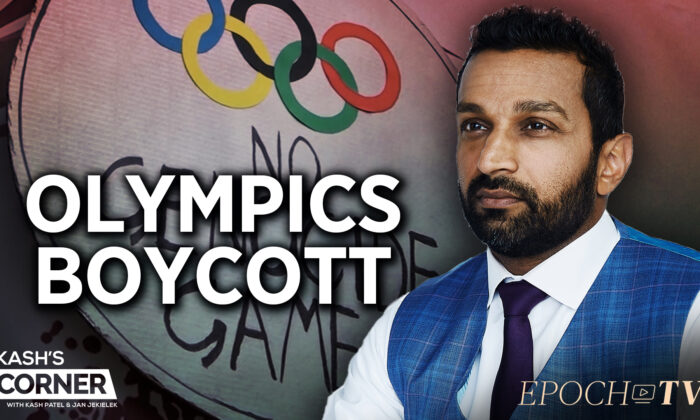 EpochTV Review: China Should Not be Allowed to Host the Winter Olympics While Committing Genocide Without Serious Repercussions

On this week’s episode of NTD’s Kash’s Corner, Kash Patel, former government official and Chief of Staff to the United States Secretary of Defense, examines the measures being taken by the U.S government in regards to the 2022 Olympic Winter Games. The competitions are set to be held in China, despite the CCP regime’s acts of genocide toward its own people.

The U.S. government has issued a diplomatic boycott of the 2022 Olympics to be held in Beijing. This means that the U.S. government will not be sending any government officials to China for the Winter Olympics. According to Kash, this action means very little, calling it a half measure at best.

The reason the boycott doesn’t go far enough is that it doesn’t carry any consequences for China. People are still attending the games, and China is still running concentration camps, causing harm to Americans, and threatening American interests. Why should America, the leader of the free world, put up with this?

There are currently three genocides happening in China right now: the Uyghurs, the Falun Gong, and the Tibetans. Kash notes that one genocide should be enough to realize this is a serious issue that must be dealt with, and these inhumane activities have been going on for years in China.

Kash says that the United States would not accept this kind of behavior anywhere else in the world, yet for some reason is essentially giving China a free pass. He believes this reveals the disconnect between the current administration and China, not only in the area of human rights abuse, but also foreign policy.

In 1936, Hitler’s Germany held the Olympics. They took place before the west knew what was about to happen in Germany with WWII just around the corner. However, today, the United States does know what is happening in China.

There are a few athletic groups, such as the Women’s Tennis Association of the United States, that have taken a stand against the China Olympics, as well as one athlete, Enes Kanter Freedom.

Kash believes organizations such as the NBA are hypocritical in their silence regarding China’s human rights abuses. He says that the NBA as an institution is representative of the problems that the U.S government is creating by its weak handling of the regime.

The NBA makes millions upon millions of dollars through the basketball league affiliations they have in China, not to mention the products they profit off of in the Chinese market. Although the NBA has spoken out against racism in the past few years, Kash thinks it’s due to profits that the NBA is looking the other way in regards to genocide.

Hosting the olympics in the face of genocide, along with the continuous effort to hurt American security interests, is a CCP propaganda scheme. The scheme is to make China look good and show they can do whatever they want, including challenging America, with no repercussions.

If the United States athletes chose to take a position on the human rights abuses happening in China, the CCP would not be able to retaliate against them. Kash believes the Olympics would be a good opportunity to call out the CCP’s behavior, as well as the companies that profit from relations with China.

China Getting a Free Pass for Genocide; Is Putin Using Ukraine as a Diversion? | Kash’s Corner [Full Episode]

Kash explains that when the Summer Olympics were given to China in 2008, it was done with the understanding that the CCP’s behavior would improve, but that did not happen. Kash says although boycotting the games and not allowing U.S athletes to compete would be the most extreme measure that the government could take, it should be kept on the table.

However, before taking such sweeping measures, there is plenty that the U.S government can do, such as enacting a high number of tariffs like the Trump administration did, as well as congress issuing legislation calling for harsher sanctions against the CCP and American companies that do business with China. The United States could also talk to their allies and ask them to stop their relationships with the CCP or else the United States will cut off assistance to them.

The white house and congress are the two biggest sticks that theUnited States can use to confront China. Without their action, it will be left to the athletes to take a stand when they arrive in China.

The International Coalition to End Transplant Abuse in China has created a pledge that people and groups can sign to never get an organ from China again. With the known practice of state sanctioned organ harvesting in China, Kash says this is a great movement to take part in and that everyone can promote on social media, including the Olympic athletes. He encourages Americans and athletes to do whatever they can to take a stand against the CCP regime’s human rights abuses, saying that the Olympics are a global celebration, and we should not be celebrating China or their behavior.

When asked his thoughts on Biden’s latest video conference with Russian President Vladimir Putin, Kash compared Putin’s sending more than a 100,000 soldiers to the Ukraine border to be the same power move of China hosting the Olympics.

Kash does not think war is imminent, but rather, that Putin knows he can gain publicity and shame America through his propaganda machines. Kash says that Putin won’t initiate real war because he knows the consequences. However, he can utilize the propaganda and optics that are created through his actions while also taking advantage of the situation in order to distract from other threatening moves he may be making towards the U.S. His recent acts are to test if the United States is willing to respond to various bold moves.

Kash believes Xi Jinping and Putin both look for ways to flex their superiority over America and show dominance over what they believe America should or shouldn’t be doing.

Watch the full episode of “Kash’s Corner” for more details, and share this article so others can take a stand against the genocide happening in China.