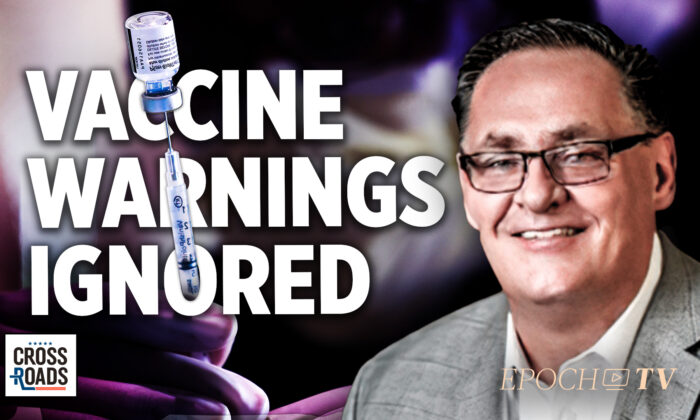 Epoch TV Review: Vaccines: A Pound of Prevention Is Not Necessarily Worth an Ounce of Cure

In the latest episode “Warnings on Vaccines Being Ignored Under U.S. Mandates,” of the “Crossroads” series, host Josh Philipp interviews cybersecurity and privacy advisor, Rex Lee about the vaccine mandates and what it means to our health and legal protection. Lee starts by advising the audience that he does not consider himself an “anti-vaxxer” as some of his own family members have chosen to be vaccinated. He focuses on medical facts regarding the vaccine as reported by the Cleveland Clinic and pharmaceutical company, Moderna. These are important facts to consider when making a decision about the vaccine.

Facts and Legalities About the Vaccine

The host points out that one of the main problems with the vaccine is that it is not being prescribed or administered by a doctor in most cases but rather by pharmacy workers or others. Lee’s physician recommended he get the vaccine, but since he has other health issues, Lee decided to do some research first. Lee said he reads everything. Moderna put out guidelines for high-risk patients with a list of conditions in which people needed to advise their provider before getting the vaccine. These included: people with compromised immune systems, people with inflammation of the heart, pregnant women, women wanting to become pregnant, and those breastfeeding. Interestingly, despite the existence of this list, the media shames people who do not promptly go out and get the vaccine.

Lee noted that his doctor did not advise him of these guidelines and many other doctors probably do not know about them. In the manufacturer’s terms of use—in addition to a list of categories for high risk patients—there is a list advising who should get the vaccine, which implies to Lee that those who fall into other categories should be cautious and check with physicians and providers before getting the vaccine. Lee says this protects third parties (i.e. walk-in pharmacies) from being sued for malpractice.

To explain further, Lee talks about his daughters as examples. When they were school age, he took them to the family doctor for their immunization shots. The doctor examined them to ensure they were compatible with the vaccine drugs. He then administered the vaccines in his office. In this scenario, if the child is harmed or killed by the vaccine, then the doctor is liable and can be sued for malpractice for misdiagnosing the patient. If one gets the vaccine from a third party, he cannot sue if there is an adverse reaction to the vaccine. Another thing complicating this issue is that it is difficult to find a primary care physician who will prescribe and administer the vaccine. Most people are going to a pharmacy, grocery store, and in one city the zoo was even offering vaccinations.

Lee saw a news report where the Moderna CEO stated that the vaccine had a 93 percent efficacy but only with mitigating symptoms—not in preventing the virus. According to Lee, the CEO also implied that boosters may be needed every six months for an indefinite period of time. On the other hand, many news reports that include interviews with Dr. Anthony Fauci, Chief Medical Advisor to the President, make it seem like everyone can get the shot, regardless of their health conditions.

Some states are requiring the vaccine in order to get admittance to certain venues. Others are requiring “vaccine passports.” New York and San Francisco have already done this. People are not able to go to restaurants, theaters, or gyms and some other businesses as well without showing they have been vaccinated. There is talk of making the information digital so it can be stored on your smartphone, which raises privacy concerns as well since networks that store data can be compromised. This also does not take into consideration those who have already had the virus and now have the antibodies. Other countries that have vaccine passport mandates consider whether or not a person has the antibodies, and those who have them do not fall under the passport restrictions. The Cleveland Clinic’s position is that if a person has the antibodies, the vaccine is not needed. Not all states are imposing these restrictions on their citizens, though. Dallas Morning News reports that Greg Abbott, the governor of Texas, issued an executive order banning vaccine mandates and the use of vaccine passports in Texas.

The Use of Masks

Next, the host talks about the conflicting information regarding the use of masks. At first, the CDC said that if a person was not vaccinated, he must wear the mask. But now to maximize protection from the Delta variant and reduce the spread of the virus, even fully vaccinated people are advised to wear masks indoors especially in areas of high transmission rates. In statistical reports where vaccinated and non-vaccinated people are compared, the chances of getting the virus and transmitting it are about the same with the Delta variant. They have since clarified this further by saying that the symptoms are less severe, but that infection can still occur. Dr. Fauci has called this a new virus, but Lee points out that this is a SARS virus and there was a SARS virus in 2003 as well, and the CDC recommended masks at that time due to the virus being airborne. He questions why we were not told to wears masks when this virus first surfaced, especially when it went airborne. This is another example of contradictions by the CDC and media reports.

The host then asks Lee to describe the big picture regarding vaccinations and the issues that have been raised. Lee said, “What I am telling people to do is, do your own homework on this. Go to Moderna, Pfizer, and Johnson & Johnson’s websites. Go to the CDC. Don’t let somebody give you information that the CDC has on their website—filtered information. Read the information on the CDC’s website about these issues as well as go to Cleveland Clinic’s website, and John Hopkins—reputable places, reputable medical institutions.” He advises that people go to their physicians and get advice based on their own health histories. Also, take the list of guidelines from the drug manufacturers to your physician and make sure you do not fall into one of the high-risk categories. He wraps up the interview by bringing up an excellent point. This situation is setting a precedent for the government to prescribe drugs that are experimental and not even FDA approved to a person without a physician’s guidance as well as taking away that person’s right to sue for malpractice if everything goes wrong. We cannot take the government’s word for it or the media when deciding about vaccines. It should be something that is carefully researched and carefully considered before making the decision for yourself and your family.