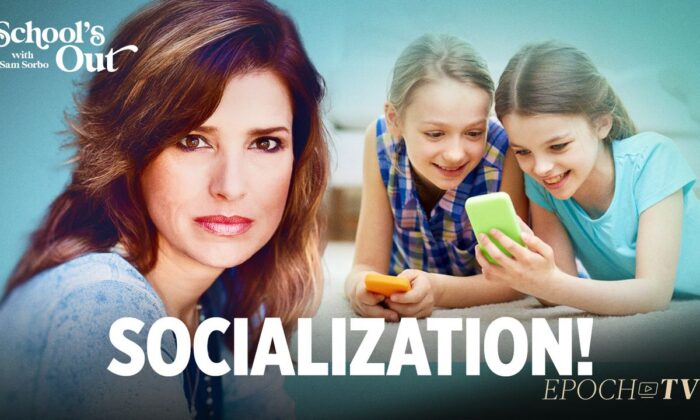 In this episode of School’s Out, the episode Socialization tackles the definition of socialization and how it relates to education. The host Sam Sorbo explores this topic and gives parents important information about this topic and the expectations and goals we have for students in regard to socialization. The Oxford Dictionary lists the definition of this word as the activity of mixing socially with others and the process of learning to behave in a way that is socially acceptable to society. Both parts of this definition have important connotations to the education of children. It is important that they learn to get along with others and also how to behave in ways that are appropriate to the situation. The host states as a mother who home schools, she gets asked all the time about socialization and how she provides this important piece of education to the students she is teaching who happen to be her own children. She stated one of her children is very sociable but her other two are less socially inclined.

She shares a story about her middle son who was starting kindergarten. She had requested that he be enrolled in the morning class so his nap schedule would not be interrupted. However, the school representing its own interests enrolled him in the afternoon class. One afternoon, he was crying and refused to get out of his car seat. She asked him what was wrong and what had happened to make him not want to go to his class with his friends. She told him if she took him home, he would have to take a nap and he readily agreed. She took him home and he went to his room and napped for three hours. Sorbo explains he was very tired and was intelligent enough to know that he did not have the stamina to be around a classroom of rowdy children for an entire afternoon. They had just returned from a family trip, and he knew he could not stand up to the social pressures of school that day. She explains that most other days following he went to school but on days when he said he was too tired, he stayed home and rested. He learned to exert his autonomy.

The host relates that she decided to do some research on socialization, so she asked some parents that she knew what the word meant to them. These were the answers she received:

She makes the excellent point that a child cannot be socialized to be around other people if he or she is stuck in a classroom most of the day with only other children to be around. When the other part of the definition is examined, it refers to acting in a manner that is found acceptable by others. This is referring to manners and morals. These are not taught very much in our times now especially since the Bible has been removed from schools. Sorbo states, “When you say you want your child to be socially normalized, you might want to be quite specific about your expectations and your ethics.” It is important to make sure that the school you send your children to and be socialized in reflect your values and morals. Learning how to interact in a socially acceptable manner includes learning etiquette, manners, relating to people of different ages, being charitable and upholding the law. These are not things generally taught in school, but rather are learned by mentorship and personal relationships.

In the next segment of the video, the host raises an important question. What if the concept of socialization in the education system is a lie? The explanation that socialization happens in the classroom when the classroom is not a microcosm of the real world is a falsehood. It is designed to make parents feel comfortable and secure that good things are happening when their child is in the classroom for most of the day. Learning to get along with other peoples is something that needs to be learned by children and it will serve them throughout their lives to learn this skill, but it does not take a “professional” to teach this to a child and a group of children can certainly not be expected to teach this life lesson to another child. There is no proof that a child attending school at an early age beats a home environment to teach socialization. The most important factor is interaction with others. Also important is the interaction with family and those bonds that are formed. Sorbo poses the question that what if family relationships could be stronger if more time was spent at home instead of in an institution. Education programs should celebrate how children are unique and activities the same. Just because some children socialize well in school does not mean that all of them do.

In 2018, in Alabama, an African-American 9-year-old student was bullied by others for her friendship with a Caucasian boy. She took her own life. Unfortunately, these types of stories of bullying pervade schools all over the nation prompting the question, “So, is school really the best place to learn social skills?” Just as good behavior can be learned, so can bad behavior and the sad truth is that many children learn cruelty and bullying in our school systems. Survival of the fittest is the creed being taught most of the time and life has no intrinsic value. The host ends the video by pointing out that if this is socialization then it goes against the definition of learning to behave in a way that is socially acceptable. We need to have purpose in the way we raise our children. We need to serve the interests of our children and stop believing the lies we have been told by our education institutions.