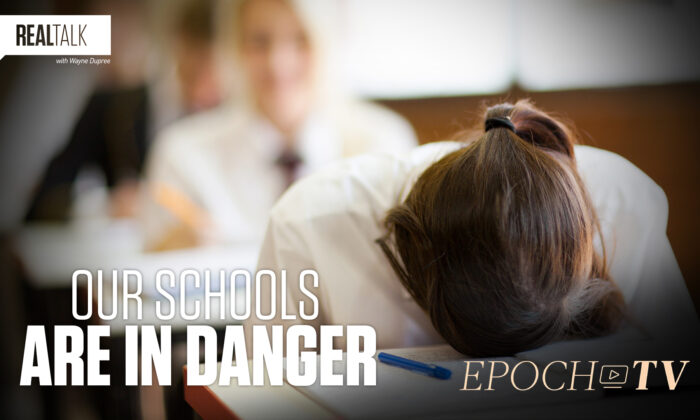 Epoch TV Review: Schools Do Not Equal the Best Education

In the video series “Real Talk,” the episode “Our Schools Are in Danger” deals with our education system in America and how we measure up to the schools in other countries and also the things that are being taught to our students. Host, Wayne Dupree, begins with a video clip of Laura Morris, a teacher for Louden County public schools. This Christian teacher of 10 years was speaking out at a school board meeting against being forced to teach critical race theory and transgender rights. The board only allowed a few members of the public to come in and speak, and an audience was not allowed. Ms. Morris informed the board members that the superintendent had sent an email to school employees telling them that a dissenting opinion was not allowed even in their personal communications. They were also asked to turn in colleagues who did not agree with school policies. She resigned at that meeting and as she was encouraging people to enroll their children in private schools, her microphone was cut off.

Our Schools are In Danger | Real Talk [Full Episode]

What is the definition of critical race theory? Education Week posted a report on the subject and defines critical race theory or CRT as, “The theory … that racism is part of everyday life, so people—white or nonwhite—who don’t intend to be racist can nevertheless make choices that fuel racism.”

CRT has been the subject of hot debate. The American Bar Association reports that in 2020 President Trump signed an executive order forbidding any inclusive or diversity training that promoted what he called divisive concepts such as race or sex stereotyping or scapegoating. His order received backlash from such groups as the NAACP and the National Urban League. Legal scholar Kimberlé Crenshaw, who coined the term, defines CRT as a verb and not a noun. She says that it is an ever-changing practice that critiques “how the social construction of race and institutionalized racism perpetuate a racial caste system with people of color at the bottom.” The critics of this theory make the point that it is dangerous to teach CRT to our children because it’s based on the premise that equitable treatment means outcomes based on the color of one’s skin rather than good character or hard work.

In a report by the Star Tribune, several students in Minnesota said they learned that World War II was about America bombing Japan and killing children. They were told that George Washington was a bad man who owned slaves. Hispanic students were told they are “victims” and white students “oppressors.” CRT is already being taught in schools today.

The host talks about the concept of “equity” as defined by our school systems. He states, “What we are seeing today in our schools is nothing more than textbook totalitarian communism.” Mr. Dupree then goes on to explain that this concept reduces everything down to the lowest common denominator. This is all done in the name of the “greater good,” but what is really happening is that people are stripped of personal choice in pursuit of an unfulfilling and arbitrary “equality.” So, it does not matter how hard people work, they will have the same as everyone else until everyone is pretty much left with nothing. If students that are struggling are given assistance to help them do the work to catch up, that is a good thing, but that is not what is being done for “equity” in our schools today.

Mr. Dupree then points out that when the states gave the federal government power to govern the schools, that is when the problem started. If schools were owned by private companies, teachers would be hired to teach and use their expertise in education. Just because the government pays for education for everyone to one extent or another does not necessarily mean that the government should be in charge of that education. Governments should provide vouchers to students and parents so that they can spend those vouchers on the school of their choice. In this scenario, students would be encouraged as individuals rather than just racial groups and not be forced into a certain mold or stereotype as they would in a government school in the name of “equity.” The host states, “Individual freedom does not guarantee equal outcomes. It does however, provide equal opportunity for people to succeed in life.”

So, what can be done to fix these problems? The host has answers: “Every parent in this country needs to be watching who runs their school board positions. They have slithered their way into our schools without notice. The far radical left is using our children to destroy us from within.” This can be stopped but it will take everyone working together in unity. The host suggests that parents start contacting their representatives and governors and push for vouchers to attend their school of choice. Parents are also encouraged to put their children in private schools or teach them at home. When the schools start losing federal funding because they are losing students, then the power shifts from the unions and officials back to the parents where it belongs. Children are valued and only parents can fight for them to get the best education possible.