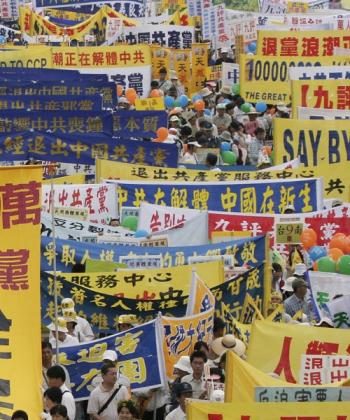 A Quit the CCP Rally. As of November 2008, almost 49 million people have quit the Chinese Communist Party already. (The Epoch Times)
Opinion

The ‘Nine Commentaries’ Are Changing China

Epoch Times Staff
biggersmaller
Print
The publication of the Nine Commentaries on the Communist Party has led the people of modern China to examine themselves, the role of the Chinese Communist Party (CCP), and China's history. People's views of the CCP, an evil ideology that has advocated revolution and violence, have changed. The Party Culture the CCP used to stay in power is being eradicated. The Commentaries has given the people of China courage to act according to their conscience and so to choose a new direction. This change is having a profound impact on China and the world.

Since the day the CCP came to power, political movements involving torture, killing and deception have never ceased. Half a century after the CCP usurped state power, as many as 80 million people have died from abnormal causes. The number of deaths is greater than the total number of people who died in both world wars; 13 times more than the number of Jews killed by Hitler, and 260 times the number of Chinese people slaughtered by the Japanese in Nanjing in 1937. After enduring such immeasurable crimes, few people have systematically questioned, condemned or attempted to ask for restitution from the CCP.

The CCP has subverted the orthodox beliefs formed over thousands of years of Chinese history by negating Chinese culture and enforcing atheism and materialism. Forcible and systematic brainwashing pervading every aspect of society have twisted the thoughts of the Chinese people. The CCP's Party Culture has turned the Chinese people into puppets it could threaten, manipulate, and deceive at will. Party Culture controls the Chinese people’s thoughts and behavior every second of their lives. Party Culture has helped the CCP to survive every crisis smoothly and to regain its power in order to slaughter its people and its own Party members again and again.

The Nine Commentaries has exposed the CCP’s lies with irrefutable and compelling historic evidence and disclosed the cruel ugliness that lies behind the CCP’s so-called "Great, Glorious, and Correct" image. The ignominious beginnings of the CCP prove the rule of communism in China was not the choice of history, as the the CCP has forced people to believe. Rather, the Party's beginnings are just a bunch lies and violence. The CCP’s history of killing explains why it’s not the savior, but the disaster of the Chinese people. The Nine Commentaries has awakened those who were deceived by the CCP and gives them the courage and ability to loosen the grip of Party Culture.

China was plagued by frequent catastrophes after the CCP came to power. Shackled by Party Culture, there is no room for dignity and freedom in the minds of the Chinese people. Only by getting rid of Party Culture can the Chinese people break the shackles of tyranny. And only then will there be a stable, abundant, free, and democratic China that values human nature and morality.

Chinese people started abandoning communism about ten years ago. In the past two years, the response of scorn has become a common occurrence. Intellectuals in China are constantly establishing new civil political parties or even a Coalition of Opposition Parties. Even a peasant whose land was illegally taken by the government concluded, “The CCP was never anything good.”

More and more Chinese have given up hope on the CCP as it continues to do evil. An Epoch Times reader who was laid off told the Epoch Times, “I used to believe that policies from the central government were good and that the local government did not execute them correctly. Now I have seen clearly the CCP is a group of mobsters from first to last.”

For the appellants who have been protesting in Beijing for years, their words have gone from “I am wronged” to “I won’t let you get away with it.”

The words of Yang Jia, “If you won’t give me an explanation, I will teach you a lesson,” have become a famous remark in China.*

The cult language the CCP has been establishing is falling apart. People have been criticizing the CCP and its dictatorial rule using language from the Nine Commentaries. Sayings, such as “love the country but not the party,” “get rid of the CCP,” “CCP go back to Siberia” can now be seen frequently on Internet blogs.

Mao Zedong defined Party Culture in a forum in Yan’an City in the 1940s, “In this world, every culture, literature or art belongs to a certain class.” And thus Party Culture is “the cogs and screws of the entire revolution machine.” Apparently for the CCP, culture is merely a tool to seize and hold political power.

The slogans the CCP advocates change every several years; from the hatred and struggles in the early days to the recent “Three Represents” and “harmonious society.” No matter how the CCP changes its slogans, they obviously serve only one purpose: maintaining the CCP's power.

Culture is a fundamental element of a nation; a nation without culture is not a nation.

The Party Culture the CCP has been using to brainwash China for decades is at best a subculture. It is a series of low-level ambiguous paradigms and a language-based environment beginning from communist ideology. As the Nine Commentaries becomes widespread, mankind possesses a weapon that can reveal the deceptive Party Culture for what it is, and the CCP is thus uprooted.

Real communism is dead, but the CCP is still holding on to communism's empty skin. As people awaken to what the CCP really is, they surely will abandon it.

*Yang Jia was arrested for riding an unlicensed bicycle and beaten by police in Shanghai in 2007. He returned to the police station later and killed six policemen. The unusual twist to this story is that the Chinese people on the Internet have defended his action, knowing how brutal and reckless the police are and hearing from his father about Yang Jia's kind treatment of other people.