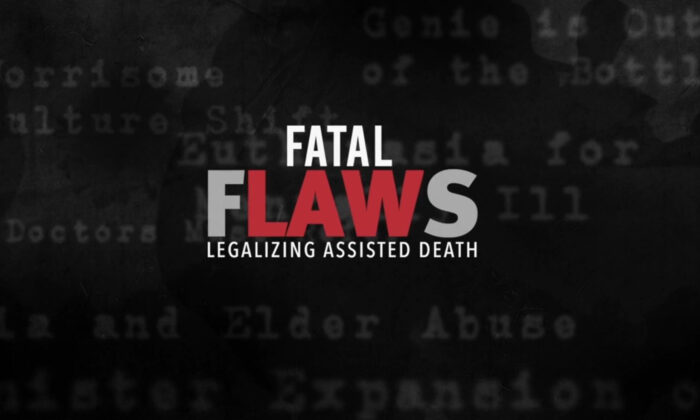 We have all experienced the loss of loved ones. But should we be giving the medical establishment the right to end their lives by euthanasia or assisted suicide? Are modern laws allowing euthanasia and assisted suicide leading the world down a slippery slope?

With thought-provoking interviews and expert opinions from both sides of the issue, director Kevin Dunn’s powerful documentary “Fatal Flaws: Legalizing Assisted Death” investigates how these controversial laws affect society over time. Some 20 years after these laws were introduced, even some of the most ardent supporters of assisted death are beginning to question where these laws are taking us.

The first of Dunn’s interviews takes place in Newfoundland, Canada, where Dunn interviews Candice Lewis and her mother, Sheila Elson. Born with cerebral palsy and spina bifida, Candice was 25 at the time of the interview.

In one instance, when Candice had to be taken to the hospital due to violent seizures, her mother Sheila was told by doctors to “abandon hope,” and that an assisted suicide should be performed on her daughter. When Sheila refused to support ending Candice’s life, one doctor pulled her to the side and told Sheila that she was “being selfish” by not encouraging her daughter to go through with the procedure. Sadly, Candice overheard the entire conversation.

The costs of long-term treatment put a great deal of pressure on already stressful decision-making processes. In the United States, access to decent palliative care (the medical caregiving approach aimed at optimizing quality of life) is extremely limited. This begs the question: Is assisted dying really being presented as a “choice?”

Assisted suicide is already legal in five countries and six U.S. jurisdictions. It is currently under debate in every country around the globe, and the United States is at a tipping point.

The film aims to help us learn from the experiences of countries that have already enacted assisted suicide laws—a critical component with regard to this intensely debated issue.

Dunn travels throughout Canada, the United States, and the Netherlands, which is considered ground zero for the legalization of assisted suicide. He speaks with people on both sides of the issue to enable audiences to better understand it.

In 1991, a Dutch psychiatrist named Dr. Chabot Boudewijn opened the doors to euthanasia and assisted suicide. He helped a 50-year-old female social worker end her life, even though she was healthy and had many friends. The woman wanted to die because she had lost both of her children through “dramatic circumstances” and had lost the will to live.

Chabot did indeed provide the means for the woman to kill herself and found himself in legal hot water because of it.

At his trial, however, he was found “guilty, without punishment.” As Dunn describes it, although the act was clearly legally wrong (there were no euthanasia and assisted suicide laws in place at that time), public sentiment had shifted.

Interestingly, Chabot now talks about a worrisome culture shift, in that assisted deaths are going beyond what they were originally intended to do. Incredibly, the doctor who facilitated the first assisted death is now concerned that his country’s medical establishment has gone too far, especially in relation to patients with psychiatric issues.

Originally, the sole intended purpose of assisted death in the Netherlands was to aid in the suicide of those who were terminally ill. But over the years that narrow definition has expanded to include those who are mentally ill, non-terminally ill, the elderly, and the disabled.

If one believes in the “slippery slope argument,” it may soon be possible for those who are simply “tired of life” or feel that their life is complete (and thus, no longer wish to live) to be able to opt for assisted death. Dunn said “the way the regulations keep expanding terrifies me.”

A doctor interviewed in the film comments that if the image of a hypodermic needle, commonly used when discussing euthanasia or assisted suicide, was replaced with an image of a gun, the discussion would quickly change.

Kevin Dunn’s film poses the question: in this day and age, would the discussion indeed change that much?

Dunn posits that our society has largely become desensitized to death. “We make jokes about it, make movies about it … video games let players put people away like rodents.” He says that this desensitization has led many to regard life and death as a matter of personal choice.

“Fatal Flaws: Legalizing Assisted Death” is a fascinating (and sometimes chilling) look at the issue of assisted death. It grapples with the subject of life and death, as well as who has the right to make choices in these matters. The well-produced film features numerous thought-provoking interviews from people on both sides of the issue.