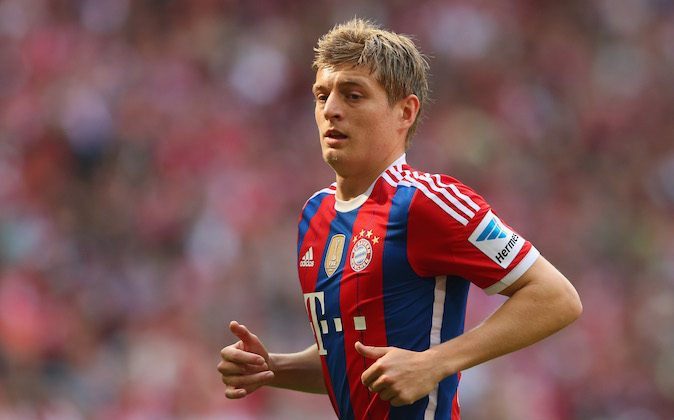 Toni Kroos of Bayern Muenchen looks on during the Bundesliga match between Bayern Muenchen and VfB Stuttgart at Allianz Arena on May 10, 2014 in Munich, Germany. (Photo by Alexander Hassenstein/Bongarts/Getty Images)
Soccer

Manchester United are in for Toni Kroos, Liverpool could move for Pedro Rodriguez, and Chelsea’s Thibaut Courtois won’t be happy at Chelsea competing with Petr Cech.

Man United have reported agreed a £20 million ($33.7 million) deal with Bayern Munich for their star midfielder Toni Kroos, according to the Daily Mail.

The 24-year-old German international has just a year left on his contract, and the Bavarian giants may opt to sell Kroos for a fee than let him leave on free transfer next season.

Man United’s move for Kroos already has the support of United legend Paul Scholes. In his blog for Paddy Power, Scholes said that “The first player I’d bring in is Toni Kroos.”

“He’s a top-class central midfield player but United need five or six to get anywhere near the top of the Premier League again.”

Meanwhile, Liverpool has been linked with another top-class midfielder in the form of Barcelona’s Pedro Rodriguez, according to the Mirror.

Liverpool boss Brendan Rodgers has declared that he will sign “one or two absolute top players,” and the versatile 26-year-old Spanish international, who has won the World Cup, the Euros, and scored 14 goals in 37 international appearances, would fit the bill.

Pedro has reportedly been told he is not wanted at the Nou Camp, and could be part of a larger shake-up under new manager Luis Enrique’s reign.

This rumor could be true since Pedro, Alexis Sanchez, and Cesc Fabregas were nowhere to be found in photos used in the launch of Barca’s new home kit.

Chelsea might have a struggle on their hands to retain the services of Thibaut Courtois.

The 22-year-old Belgian international told BBC recently that would not be “the healthiest thing” for him to return to Chelsea as he would have to compete for a first-team slot with Petr Cech.

“The two of us want to play everything. Nobody will be happy to play in only the League Cup or FA Cup,” he said.

“Things are unclear at the moment.”

Courtois added, “We will see in the next week if we can sit together with Chelsea to find something for next year, find out what they want, what my desire is. We will see.”

The current Belgium number 1 goalie has spent three seasons on loan to Atletico Madrid, and has yet to play for the Blues since signing for them in June 2011.