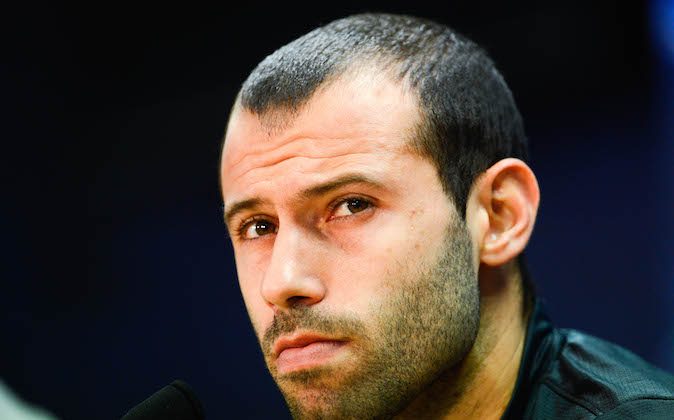 Javier Mascherano of FC Barcelona faces the media during a press conference ahead the UEFA Champions League Round of 16 second Leg match against Manchester City at the Sant Joan Despi Sport Complex on March 11, 2014 in Barcelona, Spain. (Photo by David Ramos/Getty Images)
Soccer

Liverpool is supposedly closer to re-signing their former defensive midfield star Javier Mascherano, according to the Daily Mirror.

The 29-year-old Argentine has one year to go on his Barcelona contract, and could be available for as little as £9 million ($15 million).

As Liverpool boss Brendan Rodgers is looking to strengthen his side’s leaky defense over the summer, and given Mascherano’s ability to play as either a pure defensive midfielder or in central defense, as well as his wealth of Champions League experience, this move could plausibly happen.

Man United are looking to sign Arturo Vidal for around €40 million ($55 million), according to Gazzetta dello Sport.

The 26-year-old Chilean midfielder could provide the physicality and goalscoring presence that is sorely lacking in Man United’s current crop of midfielders.

Barcelona and Real Madrid are reportedly interested in Vidal as well.

Arsenal are keeping tabs on another impressive Chilean player.

Arsenal are said to be offering €30 million ($41 million) for Barcelona attacker Alexis Sanchez, according to Spanish source AS.

Although Sanchez scored 20 goals this season, he still has to contend with Barca superstars Lionel Messi and Neymar, and hence could leave Camp Nou this summer.

Barcelona might be unwilling to let the 25-year-old forward go for €30 million ($41 million) though, as he cost the Catalan giants more to bring in back in July 2011.