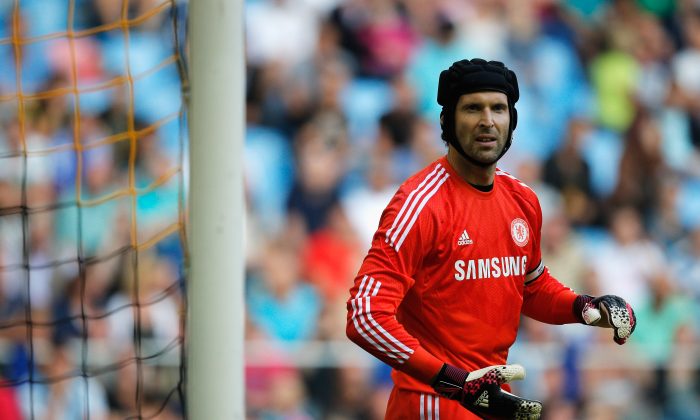 Goalkeeper, Petr Cech of Chelsea looks on during the pre season friendly match between Vitesse Arnhem and Chelsea at the Gelredome Stadium on July 30, 2014 in Arnhem, Netherlands. (Photo by Dean Mouhtaropoulos/Getty Images)
UK

Manchester United could have backed away from Mats Hummels and made a  for Daley Blind. Also, Real Madrid could be looking at Chelsea’s Petr Cech, while  Alberto Moreno might be completing his Liverpool move.

New United manager Louis van Gaal has given up the pursuit of Mats Hummels and could be targeting Daley Blind instead, according to Manchester Evening News.

United have fervently courted Hummels for most of the summer, but Dortmund have been stubbornly rejecting all moves for the 25-year-old Germany international.

Van Gaal is now believed to be going after Daley Blind instead, a Dutch international who can play at center back, wing back, and even in the holding midfield position. Blind has a £17 million ($28.5 million) valuation.

Ajax youth coach Richard Witschge said to Heldenonline: “I think Daley Blind will be leaving soon. I have a feeling.

“He has been training by himself.

“I think he has done that because there’s something going on.”

Meanwhile, Real Madrid might be making a move for Chelsea’s number one goalie Petr Cech, according to the Express.

The Spanish giants are willing to fork out £10 million ($16.8 million) to bring the Czech Republic ‘keeper to the Bernabeu Stadium.

Chelsea manager Jose Mourinho has indicated he wants Cech and Courtois to stay and compete for a position in the team, but as a multiple title-winning veteran goalkeeper in the prime of his career, Cech will unlikely tolerate being benched, and could move.

On Merseyside, Liverpool could final secure Spanish left back Alberto Moreno in the following week, according to the Mirror.

Earlier, the Reds were unable to negotiate a deal for the 22-year-old player, but he could be leaving for £14 million ($23.5 million)