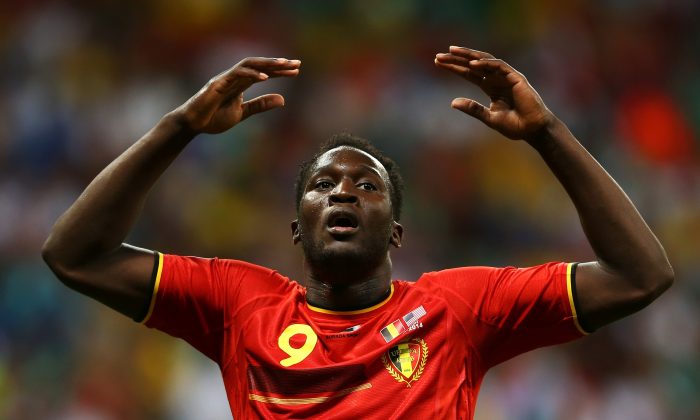 Romelu Lukaku of Belgium reacts during the 2014 FIFA World Cup Brazil Round of 16 match between Belgium and the United States at Arena Fonte Nova on July 1, 2014 in Salvador, Brazil. (Photo by Michael Steele/Getty Images)
Soccer

Real Madrid was linked with a loan move for AS Monaco’s Radamel Falcao, but Madrid manager Carlo Ancelotti has rubbished the notion that Los Blancos are looking for a back up striker.

“[Karim] Benzema is very reliable and we can also use players like Isco, who can act as a false nine,” said Ancelotti.

“We are not looking for another striker because we don’t need one.”

Meanwhile, Barcelona is looking to pry another Liverpool player from Merseyside, according to Catalan publication Sport.

Barca could be launching a £11.8 million ($20 million) bid for the Denmark international soon as they seek a replacement for retired center back and club captain Carles Puyol.

Barca are also said to be chasing Daley Blind, Thomas Vermaelen and Jan Vertonghen, but SPORT believes that Agger is “the most affordable” of the current available center backs.

Since Liverpool are said to be close to sealing a deal with Southampton for center back Dejan Lovren, they might be willing to let Agger leave.

Merseyside is the place to be for big summer transfers, as Romelu Lukaku looks ready to leave Chelsea for Everton, according to talkSPORT.

Everton head of recruitment Ian Atkins told talkSPORT that: “Romelu had a terrific season for Everton last year and I know everyone at the football club wants to see him back.”

“Hopefully things can be sorted out, I think he’s quite settled in his mind that he wants to come to Everton, and hopefully he’ll be pulling on our blue shirt again next term.

“Our loan signings all did brilliant for us last season. Gareth Barry has signed permanently now which is fantastic, and hopefully Lukaku will as well.

“I know the manager would like back him at Everton and I’m sure if he comes he’ll be a great asset and can help us get to that next level of European football.”