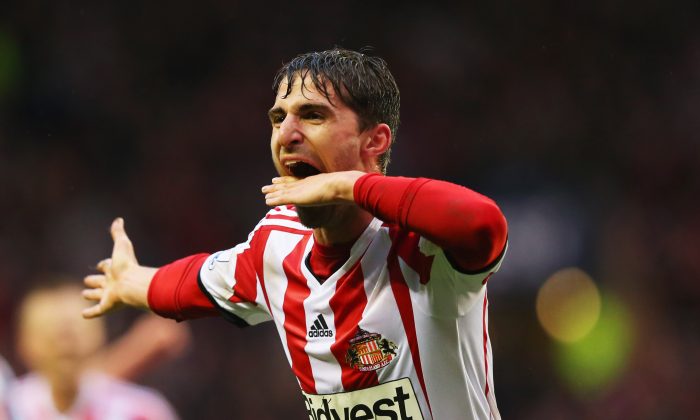 Fabio Borini of Sunderland celebrates as he scores their second goal during the Barclays Premier League match between Sunderland and West Bromwich Albion at Stadium of Light on May 7, 2014 in Sunderland, England. (Photo by Alex Livesey/Getty Images)
Soccer

Morgan Schneiderlin is not headed for Tottenham Hotspur, Marcos Rojos could be going to Southampton, and Sunderland are still keen on Fabio Borini.

Spurs boss Mauricio Pochettino is interested to bring his former charges Morgan Schneiderlin and Jay Rodriguez to White Hart Lane, but Southampton chairman Ralph Krueger has insisted that nether will be sold, according to Sky Sports.

“They are part of the core that we have decided to keep in Southampton,” Krueger said.

“Jay Rodriguez and Morgan Schneiderlin are not for sale.

“They will be a part of our club as we enter the new season, and in and around Jay Rodriguez and Morgan Schneiderlin and the rest of our core players, we’re excited to continue to build forward but all of those stories (linking the pair with a move away) are false, Krueger added.

Schneiderlin was particularly furious about the news that he won’t be sold, and tweeted: “6 years of an amazing journey #saintsfc DESTROYED in 1 hour !!!”

The Saints are keen on rebuilding after letting go of Luke Shaw, Adam Lallana, Rickie Lambert, and Calum Chambers, and have turned their attention to Argentine star Marcos Rojo, according to Portuguese newspaper The Game.

Southampton will have to cough up £16 million to bring the left back from Sporting Lisbon.

Earlier, Rojo had said: “We still do not know what my future will be.

“For now I intend to return to Sporting on the 30th July, and then we’ll see.

“It is a matter for the club and my representatives. I’m cool.”

The 23-year-old Italian went on loan to the the Black Cats in the 2013/2014 season, where he finished as club joint top scorer with Adam Johnson with 10 goals.

Sunderland boss Gus Poyet wants to make Borini a permanent feature at the Stadium of Light, and looked set to sign the Liverpool forward until he injured his shoulder in a pre-season clash against Roma.

However, Poyet is undeterred by Borini’s injury, and is restarting talks with Liverpool.

“He is being assessed now for his shoulder injury. That’s stopped everything a little bit,” Poyet said.

“We will see. I have not held talks with him, but the club has, although that’s private.

“We know where we stand,” Poyet added.