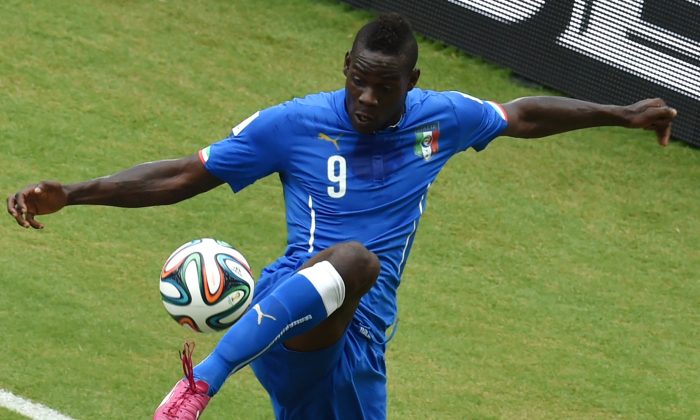 Italy's forward Mario Balotelli controls the ball during a Group D football match between Italy and Uruguay at the Dunas Arena in Natal during the 2014 FIFA World Cup on June 24, 2014. (YASUYOSHI CHIBA/AFP/Getty Images)
Soccer

Up on Merseyside, Liverpool have made a £14.2 million bid for Xherdan Shaqiri, according to Swiss newspaper Blick.

However, Shaqiri has denied that he is seeking a move on his Facebook page.

“It is the time of year when much is written, but as we all know, there is very little truth behind it,” wrote the 22-year-old Swiss international.

“As you all know I am currently on holiday so I am not in talks with other clubs nor have I spoken with any journalists.

“My advisers are in regular contact with the responsible people at FC Bayern so there is no reason for speculation,” he concluded.

Meanwhile, Chilean midfielder Arturo Vidal has told Gazzetta dello Sport that he is not interested in a move to Man United.

“No, no,” Vidal said when asked if he is considering making a switch to Old Trafford this summer.

“I’m still on holiday at the moment. Can I say I’m staying at Juve? I don’t know.

Vidal might still move though, because he concluded that he “still [hasn’t] spoken to Allegri or my team-mates” without confirming that he would staty.

Up in north London, Arsenal boss Arsene Wenger has been given the chance to sign Mario Balotelli, according to Italian newspaper Tuttosport.

AC Milan are supposedly okay with their star striker leaving in a £7.9 million plus Joel Campbell move.

Campbell had an outstanding World Cup 2014 for Costa Rica, but has yet to play for the Gunners despite having signed for them three seasons ago because he could not obtain a work permit to play in England.

Wenger might yet sell Campbell to bring the mercurial and controversial Italian to his squad.