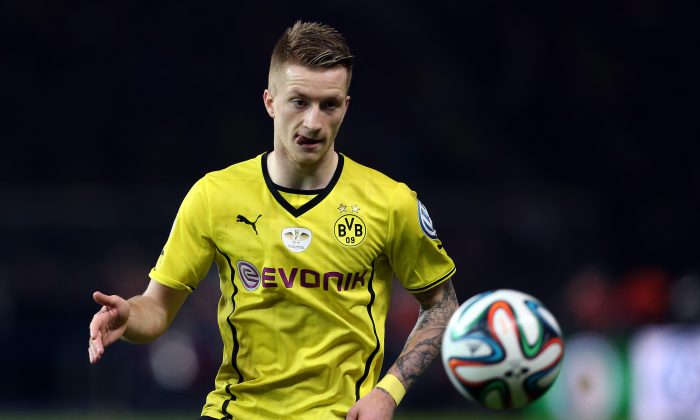 Marco Reus of Dortmund focusses the ball during the DFB Cup final match 2014 between Borussia Dortmund and Bayern Muenchen at Olympiastadion on May 17, 2014 in Berlin, Germany. (Photo by Ronny Hartmann/Bongarts/Getty Images)
Soccer

Arturo Vidal could have a verbal agreement with Manchester United, Jose Mourinho wants to sell Fernando Torres, and Liverpool could try for Marco Reus.

According to Chilean newspaper El Mecurcio, Arturo Vidal will be joining Manchester United from Juventus for a £63.3million ($107.3 million) fee.

Meanwhile, Fernando Torres’ days at Chelsea may be numbered, according to the Telegraph.

Blues boss Jose Mourinho needs to sell one of his foreign players because they are currently above the the quota of 17 now, with the return of Chelsea legend Didier Drogba to Stamford Bridge.

“From the group you are expecting us to have as a squad, I have to send one away because we have one extra foreign player,” Mourinho said.

“So from all these players, if you think all of them have to stay, you are wrong. One of them has to go.”

Atletico Madrid could take Torres back, and AS Monaco might launch a bid for the misfiring 30-year-old Spaniard should Radamel Falcao leave.

Over on Merseyside, Liverpool could be tempted to make a bid for Borussia Dortmund’s Marco Reus.

German newspaper Bild says that Reus has rejected a new contract with Dortmund, and this has prompted a number of clubs to home in on his situation.

Reus’s contract only ends in 2017, but his £27 million ($45.8 million) release clause will become active next summer.

Liverpool are looking for a star player to replace their former top striker Luis Suarez, who left for Barcelona earlier in the summer.