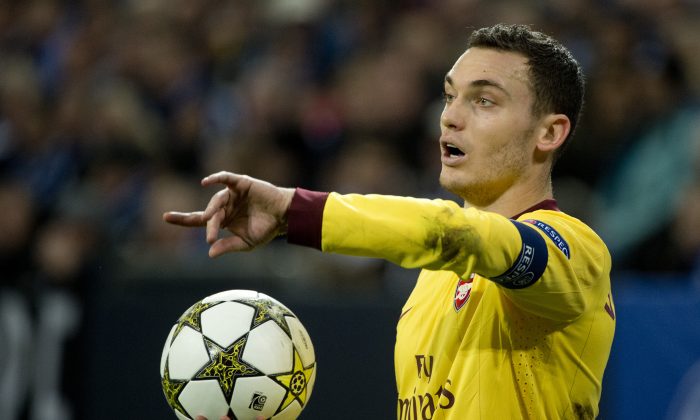 Arsenal's Belgian defender and captain Thomas Vermaelen prepares for a throw during the UEFA Champions league group B football match between Schalke 04 and Arsenal in Gelsenkirchen on November 6, 2012. The match ended in a 2-2 draw. (ODD ANDERSEN/AFP/Getty Images)
Europe

Thomas Vermaelen is close to a Barcelona move, Daniel Agger could switch to the Emirates, and Juan Cuadrado could be headed to Manchester United.

According to BBC’s David Ornstein, the Gunners have accepted a fee of £15 million ($25.2 million) for their club captain and center back Thomas Vermaelen.

Vermaelen will sort out personal terms and a medical examination over the weekend, and could be unveiled next week.

Wenger is not the only one to try and lure Agger away from Merseyside. Barcelona supposedly made a move, as well as Agger’s old club, Denmark side Brondby.

Brondby chairman Jan Bech Andersen said earlier that, “We will work really, really hard to secure Daniel but as he has also said, when he was here with Liverpool, the timing has to be right.”

Meanwhile, new Man United boss Louis van Gaal’s search for a wing back could see him sign Fiorentina and Colombia star Juan Cuadrado, according to the Express.

Van Gaal discovered a penchant for the 3-5-2 formation after enjoying success with it with Holland at World Cup 2014, but lacks proper wing backs at Old Trafford.

With money to spend and the possibility of stars Javier Hernandez and Shinji Kagawa departing soon, Van Gaal might be ready to meet the Serie A side’s asking price.