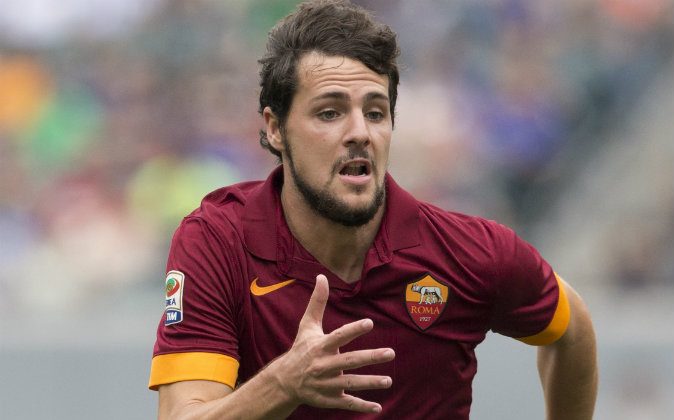 Forward Mattia Destro #22 of AS Roma participates in the match against FC Internazionale Milano during the International Champions Cup on August 2, 2014 at Lincoln Financial Field in Philadelphia, Pennsylvania. (Photo by Mitchell Leff/Getty Images)
UK

Angel di Maria is moving to Manchester United, Chelsea are interested in Mattia Destro, and Liverpool are not pursuing Samuel Eto’o after securing Mario Balotelli deal.

Real Madrid and Man United have settled on a transfer free for Angel di Maria, according to ESPN FC.

The 26-year-old Argentinian midfielder will cost United 80 million euros, similar to what Madrid had to pay Monaco for James Rodriguez earlier in the summer.

Di Maria’s move to Old Trafford will be new United boss Louis van Gaal’s first marquee signing of the summer, and a much needed one, given how United are currently very weak in central midfield.

If the move is successful, the 23-year-old Italian striker will join the company of Diego Costa, Didier Drogba, and Fernando Torres in leading the Chelsea line.

On Merseyside, Liverpool are not going to sign Samuel Eto’o after since they are close to securing a move for Mario Balotelli, reports the Liverpool Echo.

Eto’o is now a free agent after leaving Chelsea last season, and Reds boss Brendan Rodgers considered signing him in the event Liverpool fail to get a top striker before the transfer window closes.

Balotelli went to Liverpool for his medical and should be completing the paperwork for a three-year deal on Monday.

Claudio Vigorelli, Destro’s agent, confirmed with alfredopedulla.com. that Chelsea and AC Milan are going after his client.

“I cannot deny he is at the centre of some important situations that could develop,” said Vigorelli.

“More Milan or Chelsea? The market is unpredictable. These are two interested clubs.

Destro is valued at £20 million by Roma.