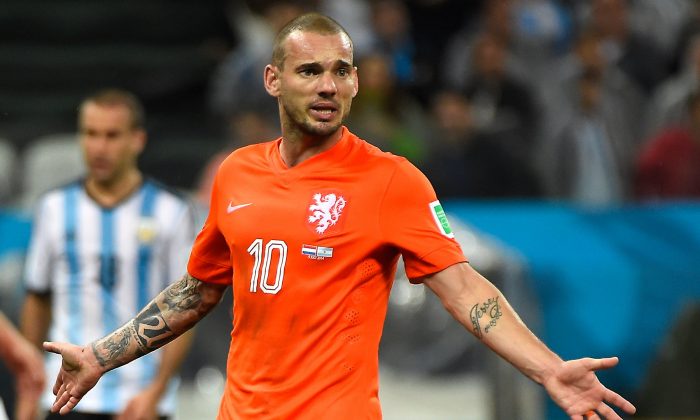 Netherlands' midfielder Wesley Sneijder reacts during the second half of extra time during the semi-final football match between Netherlands and Argentina of the FIFA World Cup at The Corinthians Arena in Sao Paulo on July 9, 2014. (ODD ANDERSEN/AFP/Getty Images)
Soccer

Manchester United could sign Wesley Sneijder, Arsenal turn down Loic Remy, and Liverpool target Alberto Moreno could be slipping away from an Anfield move.

Galatasaray have supposedly agreed to let veteran attacking midfielder Wesley Sneijder to leave for €20 million ($27 million), according to the Mirror.

Club president Unal Aysal reportedly said: “If Galatasaray receive an offer of €20 million, we do not have the luxury of saying no.

“That is stipulated in the contract.”

Man United manager and former Netherlands coach Louis van Gaal is known to admire Sneijder, and the club has tried to pursue the 30-year-old Dutchman before.

Given Van Gaal’s close working relationship with Sneijder and with news that Michael Carrick will be out for two months after undergoing an ankle injury, Sneijder might be on his way to Old Trafford.

Liverpool have also expressed interest in Remy, and could be next in line to sign the striker.

The Reds may move for Remy, but they look set to miss out on Aberto Moreno, according to Spanish newspaper AS.

The 22-year-old has been one of Liverpool boss Brendan Rodgers’ top transfer targets in this transfer window, but Sevilla had earlier rebuffed Liverpool’s £16 million ($27.4 million) transfer bid.

Atletico Madrid are now favorites to sign Moreno because they are willing to offer right back Javier Manquillo and forward Leo Baptistao in a swop deal.

Sevilla newspaper ABC has since reported that Liverpool will be making a final bid of more than £20 million ($34.2 million) this week in one final attempt to sign the defender.

The Reds have already loaned striker Iago Aspas this week in what is most likely as an attempt to sweeten a deal for Moreno.