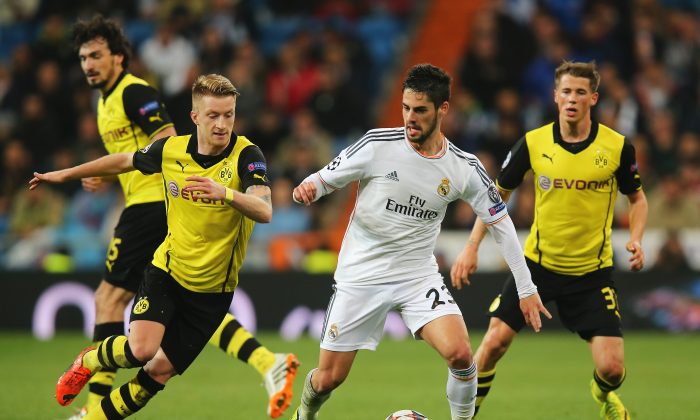 Italian newspaper Tuttosport says there are fears that Vidal will hand in a transfer request.
On top of that, Man United has made a £47.4million ($80.5 million) bid for Vidal at the same time, according to Italian paper Gazzetta Dello Sport.
Red Devils manager Louis van Gaal made the offer to Vidal’s agent Fernando Felicevich.
Meanwhile, Isco is reconsidering his future at Real Madrid, fichajes.net reports, and this could be good news for Liverpool, who have been linked with the attacking midfielder.
The highly rated 22-year-old Spaniard is said to be considering his future after the arrival of James Rodriguez to Real Madrid.
Isco could not get a regular spot on Carlos Ancelotti’s team, having played 29 games in all competitions, and only starting 14 of those matches.
Liverpool have lost Luis Suarez to Barcelona already earlier in the summer, and could be looking to make a big money move to add another attacker to their team.

In north London, Arsenal boss Arsene Wenger looks likely to make a move for either Morgan Schneiderlin or Sami Khedira this summer.

Wenger seems keen to add a highly rated defensive midfielder to his team, and both Schneiderlin and Khedira have been linked with a move to Arsenal for a while.

BBC understands that Wenger is planning talks with Southampton for Schneiderlin on either Sunday or Monday.

Khedira, on the other hand, had said earlier that he doesn’t want a move, but could change his mind if Wenger is willing to give him a pay rise.