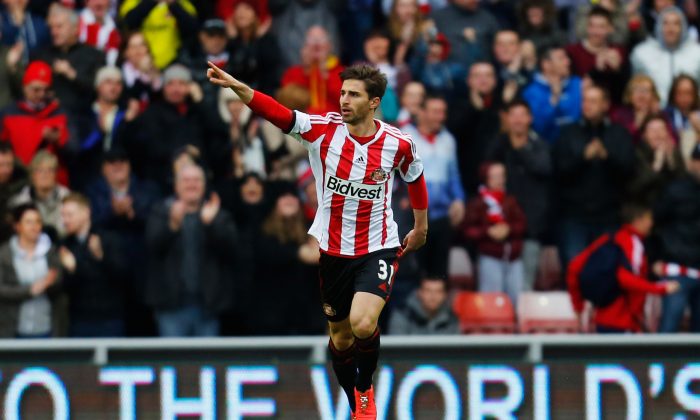 Fabio Borini of Sunderland celebrates as he scores their first goal during the Barclays Premier League match between Sunderland and Swansea City at Stadium of Light on May 11, 2014 in Sunderland, England. (Photo by Paul Thomas/Getty Images)
Soccer

On Merseyside, Liverpool have agreed to sell Italian striker Fabio Borini to Sunderland for a £14 million ($23.9 million) fee, according to Sky Sports.

The 23-year-old striker was one of Liverpool manager Brendan Rodgers’ initial signings.

Borini failed to impress after injuries and a lack of regular playing time.

Last season, Borini joined the Black Cats on loan where he shined, scoring 7 goals and providing 2 assists in 25 appearances.

With Borini’s departure to Wearside, and Luis Suarez’s transfer to Barcelona after yet another “Bite-Gate” incident at the World Cup, Liverpool only have two first team strikers left in the form of Daniel Sturridge and Rickie Lambert.

First in line is Bayer Leverkusen midfielder Lars Bender, who is estimated to cost about £20 million ($34.2 million).

Wenger originally targeted Sami Khedira, but was put off by his excessive wage demands.

The Bender deal is supposedly settled, and the German player should be heading to London for a medical soon.

Griezmann also impressed at World Cup 2014 with his turn of pace and overall play.

Milan have reportedly asked £29 million ($49.5 million) for the striker, Wenger might break the bank for the talented Italian after rejecting a move for Queens Park Rangers’ Loic Remy.

Meanwhile, Javier Hernandez could be moving out of Old Trafford on loan to Inter Milan next season, according to talkSPORT.