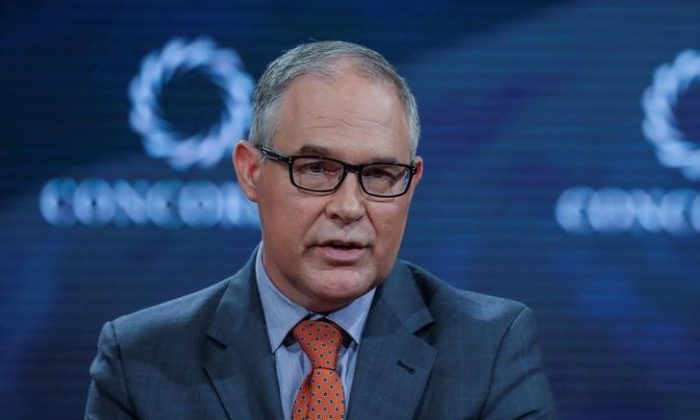 WASHINGTON–The U.S. Environmental Protection Agency proposed a rule on Tuesday that would limit the kinds of scientific data regulators can use to craft legislation.

Under the new proposals, the EPA will no longer be able to rely on scientific research that is underpinned by confidential medical and industry data. The measure was billed by EPA Administrator Scott Pruitt as a way to boost transparency for the benefit of the industries his agency regulates.

“The science that we use is going to be transparent, it’s going to be reproducible,” Pruitt told a gathering at the EPA.

“It’s going to be able to be analyzed by those in the marketplace, and those that watch what we do can make informed decisions about whether we’ve drawn the proper conclusions or not,” said Pruitt.

The EPA has for decades relied on scientific research that is rooted in confidential medical and industry data as a basis for its air, water and chemicals rules. While it publishes enormous amounts of research and data to the public, the confidential material is held back.

Business interests have argued the practice is tantamount to writing laws behind closed doors and unfairly prevents them from vetting the research underpinning the EPA’s often costly regulatory requirements. They argue that if the data cannot be published, the rules should not be adopted.

But ex-EPA officials say the practice is vital.

“Other government agencies also use studies like these to develop policy and regulations, and to buttress and defend rules against legal challenges. They are, in fact, essential to making sound public policy,” former EPA Administrator Gina McCarthy and former assistant administrator for air and water Janet McCabe wrote in an op-ed in the New York Times last month.

The new policy would be based on proposed legislation spearheaded by the chairman of the House of Representatives Science Committee, Lamar Smith, a Republican who rejects the well-publicized views on climate change.

Emails obtained through a public records request last week showed that Smith and his staff met with Pruitt’s staff in recent months to craft the policy. Those emails also showed that Pruitt’s staff grappled with the possibility the policy would complicate the chemicals industry, which submits reams of confidential data to EPA regulatory programs.

Pruitt’s proposal “ensures that data will be secret no more,” Smith said in remarks introducing Pruitt at the EPA gathering. “For too long the EPA has issued rules and regulations based on data that has been withheld from the American people.”

But a letter signed by 985 scientists on Monday said the proposal would “greatly weaken” the agency’s ability to consider all the scientific information needed to form rules and implored Pruitt not to go through with the restrictions.

The proposal will be open for a 30-day comment period and would have to be finalized before entering into force.