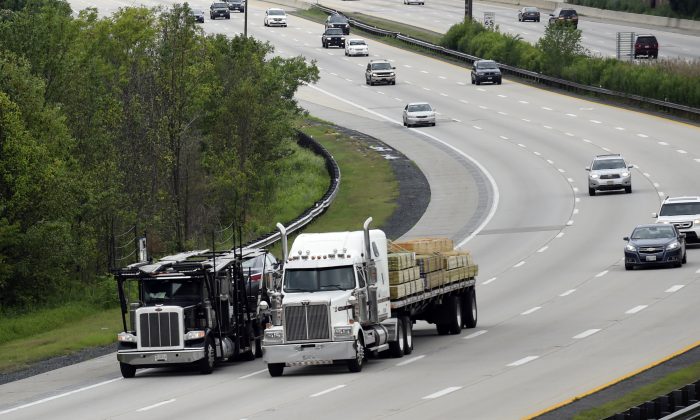 Trucks head eastbound on Rt 50 in Bowie, Md.,
US

The new rules from the Environmental Protection Agency are designed to slash carbon dioxide emissions by 24 percent over the next 12 years while reducing oil consumption by up to 1.8 billion barrels over the lifetime of the vehicles sold under the rule.

Medium and heavy-duty vehicles account for about 20 percent of greenhouse gas emissions and oil use in the U.S. transportation sector, an impact on the environment and a contributor to climate change. The trucks and vans comprise only 5 percent of vehicles on the road.

The rules come amid a flurry of recent actions by Obama on the environment, including a new federal rule regulating small streams and wetlands and a separate rule to restrict greenhouse gas emissions from airplanes.

The administration also is expected to move forward this summer on its plan to curb carbon pollution from coal-fired power plants, a rule Republicans in Congress have vowed to stop.

The long-expected rules also come one day after Pope Francis issued a teaching document calling for the world to take action to slow climate change.

Transportation Secretary Anthony Foxx said the new rules would help the environment and the economy, as trucks use less fuel and shipping costs go down. Foxx called the rules “good news all around.”

“With emission reductions weighing in at 1 billion tons, this proposal will save consumers, businesses and truck owners money,” McCarthy said. At the same time, the rules will “spur technology innovation and job-growth, while protecting Americans’ health and our environment over the long haul,” she said.

The truck rule appeared to generate less controversy than some of the previous regulations on this issue, although the industry was still reviewing the proposal.

The American Trucking Association said industry generally supports the new rules, but remains concerned that it may result in use of technologies on vehicles before they can be fully tested. Trucks carry goods from produce to timber and oil, as well as packages from major companies such as Amazon, on highways across the country.

“Fuel is an enormous expense for our industry – and carbon emissions carry an enormous cost for our planet,” said ATA President and CEO Bill Graves. “That’s why our industry supported the Obama administration’s historic first round of greenhouse gas and fuel efficiency standards for medium and large trucks and why we support the aims of this second round of standards.”

Still, Graves and other officials said truck and engine manufacturers need time to develop solutions to meet the new standards

The proposed standards would cover model years 2021-2027 and apply to semi-trucks, large pickup trucks and vans, and all types and sizes of buses and work trucks, officials said.

The Owner-Operator Independent Drivers Association of Grain Valley, Missouri, which counts 150,000 members, said it was concerned that the rules would “push truckers to purchase technology that is not fully tested and may lead to costs such as increased maintenance and down time that will eclipse the potential savings estimated in the proposal.”

Once completed, the rules are expected to lower carbon dioxide emissions by about 1 billion metric tons.

The rule builds on fuel efficiency and carbon pollution standards already in place for model years 2014-2018. Those rules are expected to reduce greenhouse gas emissions by 270 million metric tons and save vehicle owners more than $50 billion in fuel costs, compared to previous standards.

“Anyone who’s ever been stuck behind a truck or bus knows how much they pollute,” said Travis Madsen of Environment America, an advocacy group. “Making trucks go farther on a gallon of fuel can curb pollution, help save the planet and save money,” he said.

The rules will be open to public comment for at least two months and would be completed next year.