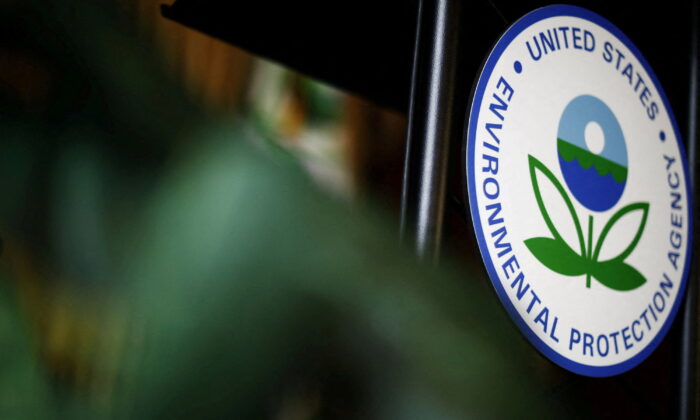 The U.S. Environmental Protection Agency (EPA) sign is seen on the podium at EPA headquarters in Washington, U.S., on July 11, 2018. (Ting Shen/Reuters)
By Katabella Roberts

The U.S. Environmental Protection Agency (EPA) is considering implementing a new rule that would stop some companies from avoiding reporting on how much “forever chemicals” they release into the environment.

In a statement on Dec. 5, the EPA said the proposed rule would improve reporting on the toxic chemicals known as PFAS, per-, and polyfluoroalkyl substances to the Toxics Release Inventory (TRI).

The TRI is an annual report comprised of information that has been submitted from facilities and manufacturers regarding their use of certain chemicals that are linked to cancer, significant adverse acute human health effects, or significant adverse environmental effects.

Currently, companies and manufacturers, through a “loophole,” can avoid reporting on PFAS. The loophole allows them to disregard any chemical in a mixture with a concentration below 1 percent, also known as “de minimis exemption”.

In January 2020, Congress, through the passing of the National Defense Authorization Act (NDAA), expanded the list of chemicals covered by the TRI to 180 and also provided a framework to automatically add other PFAS in the years to come.

Despite this, EPA said that in 2021 and 2022, fewer companies and facilities reported PFAS to TRI than expected, and after probing the matter, EPA found that facilities cited the concentration threshold or “de minimis exemption”

Thus the agency is proposing listing PFAS as “chemicals of special concern,” thereby making them ineligible for the de minimis exemption.

“PFAS continue to pose an urgent threat to our country and communities deserve to know if they may be exposed because of the way these chemicals are being managed, recycled, or released,” said EPA Administrator Michael Regan in a statement.

“By removing this reporting loophole, we’re advancing the work set out in the Agency’s PFAS Strategic Roadmap and ensuring that companies report information for even small concentrations of PFAS,” he added.

PFAS are man-made chemicals that have been dubbed “forever chemicals” because they break down very slowly over time in both the environment and the bodies of humans and animals.

One study by the Centers for Disease Control and Prevention’s National Health and Nutrition Examination Survey (NHANES) found that PFAS are in the blood of 97 percent of Americans.

The chemicals have been linked to cancers, liver damage, low birth weight, and other health problems.

If the EPA proposal is finalized, it would also remove the de minimis exemption for purposes of supplier notification requirements to downstream facilities for “all chemicals on the list of chemicals of special concern, which also includes certain persistent, bioaccumulative and toxic chemicals like lead, mercury, and dioxins,” EPA said.

“This change will help ensure that purchasers of mixtures and trade name products containing these chemicals are informed of their presence in mixtures and products they purchase.”

The proposal has already received praise from environmental groups and lawmakers, including Senate Majority Whip Dick Durbin (D-Ill.), who wrote on Twitter that he supports the move.

“This will require facilities to report their use of toxic PFAS and help protect public health and the environment through comprehensive tracking of all contaminant sources,” Durbin wrote.