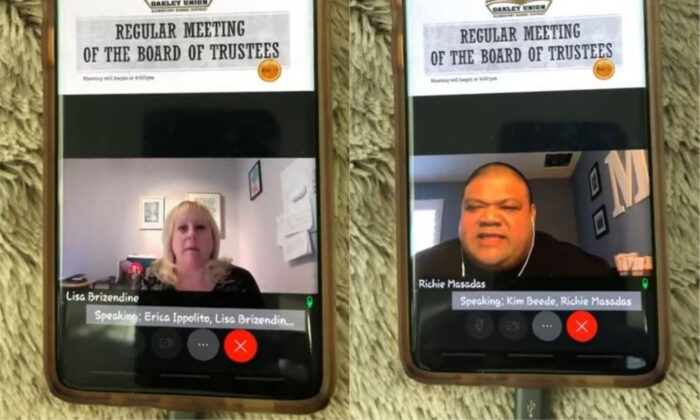 In screenshots from a video, school board members in California are seen during a Feb. 17, 2021 meeting. (YouTube)
US News

Every member of a district school board in California has stepped down after video footage showing them mocking parents who are pushing for schools to reopen went viral.

They initially discussed obtaining technology that would cut parents off after three minutes when they tried leaving messages.

“I love that,” Brizendine said.

They then began talking about something a parent had said about Beede, who asked fellow members, “Are we alone?”

“[Expletive], if you are going to call me out, I am going to [expletive] you up! Sorry! That’s just me,” she said, prompting laughter.

“They want to pick on us because they want their babysitters back,” she said.

“I totally hear that because my brother had a delivery service for medical marijuana and the clientele were parents with their kids in school,” Masadas said.

“When you got your kids, no more [expletive],” he added.

Beede soon read a message that the meeting was public.

“Uh-oh,” she said. “We have the meeting open to the public right now.”

Oakley Union School District Superintendent Greg Hetrick, who was part of the meeting and proposed the new technology but didn’t speak during the later portion, said in a statement that during the meeting, “there were unfortunate and truly inappropriate comments made that were heard by many.”

“These comments are not typical and more importantly they are not what the community should expect from our school district,” he said, adding that he would work on rebuilding trust.

Beede, Ippolito, and Masadas said in a joint statement that they “deeply regret the comments that were made in the meeting.”

“As trustees, we realize it is our responsibility to model the conduct that we expect of our students and staff, and it is our obligation to build confidence in District leadership; our comments failed in both regards, and for this, we offer our sincerest apology. … To help facilitate the healing process, we will be resigning our positions … effective immediately,” they added.

The education code outlines that vacancies should be filled by the president of the county board of education.

Costa County Board of Education President Annette Lewis appointed herself and Mike Maxwell, a county board member, to the school board for the time being.

“I look forward to working with the OUESD community to determine the best course of action to fill these seats with people who will represent the best interests of students, families, teachers, and school staff,” Lewis said in a statement to news outlets.

Jenny Tsang, a school reopening advocate and parent, told The Epoch Times: “Parents who are for in-person learning are getting attacked. They will not stop advocating for the kids. … The children are currently harmed … not just like right now in terms of their grades, but also their future.”

Oakley resident Lori Dimercurio told The Epoch Times: “That was embarrassing that [the board members] would even make comments like that. Also, they should remember there is always a microphone on somewhere.”