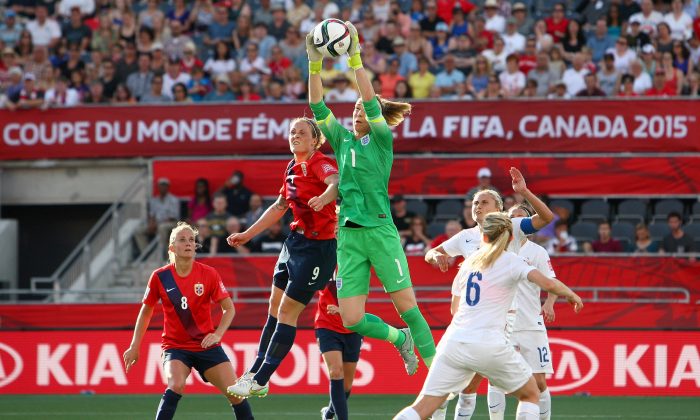 England’s Karen Bardsley snags a ball while under pressure in FIFA Women's World Cup action against Norway at Lansdowne Stadium on June 22, 2015 in Ottawa. Bardsley was chosen as player of the match. (Francois Laplante/FreestylePhoto/Getty Images)
Canadian Content

OTTAWA—England earned the right to face Canada in the FIFA Women’s World Cup quarterfinals with a gritty come-from-behind 2–1 win over Norway on Monday. England manager Mark Sampson sees the two squads as being similar in some respects and both are responding to the weight of expectations with character and heart.

In the oppressive heat at Lansdowne Stadium—play stopped for a water break in the first half—English goalkeeper Karen Bardsley stood tall and bailed out her defense when needed, much as her Canadian counterpart Erin McLeod did in Vancouver on Sunday—both were awarded player of the match in their country’s respective Round of 16 wins.

“I think it comes down to moments. Fortunately for me, things just seem to slow down and I just seem to be in the right frame of mind to make myself as big as possible,” Bardsley said.

England’s right back Lucy Bronze scored a goal worthy of any game-winner with a powerful strike from near the top-right corner of the 18-yard box.

Like Canada against Switzerland, England was second best in the first half, but Sampson and his staff made the right adjustments and they eventually paid off for the “Three Lionesses.”

England’s two substitutions—Jill Scott for Fran Kirby and Jodie Taylor for Toni Duggan—allowed the team to string a few more passes together in the Norwegian half.

And that was precisely what led to Bronze’s winner—a few clever passes created some space for Bronze to tee it up.

“I was moving a little to the right and then she shot it back to the left so I was a little late,” explained Norwegian goalkeeper Ingrid Hjelmseth, beaten at her short side.

“Compliments to my English colleague, he made some nice tactical changes at halftime,” said Norwegian coach Even Pellerud, who twice coached Canada at the Women’s World Cup. England denied him the chance to face his former team. “They managed to come back with 2 beautiful goals,” Pellerud added.

Sampson felt a genuine sense of pride for his team to show that resilience to come back from a goal down.

In the first half Norway’s central midfielder Lene Mykjaland had too much space to pass the ball to her teammates making darting runs into good positions.

“We needed a bit more physicality; thought the ref was poor in the first half, Norway got away with a bit too much, so we needed to step up and play to the rules we’re given.” Norway committed five fouls to England’s two in the first half.

Norway had taken the lead early in the second half off a corner kick, but England equalized off their own corner just seven minutes later when captain Steph Houghton fought through a challenge to head the ball past Hjelmseth. From then on, England took over the game.

Sampson, a Welshman coaching in his first Women’s World Cup, has turned his side around after a disappointing 1–0 loss to France to kick off the tournament. Now, England has reeled off three straight wins and the side is brimming with confidence.

“It was a big win for our country. We’re in a good place, we’re really together and we’re determined to keep the journey going,” Sampson said.

“We showed an amazing amount of character today. We weren’t discouraged at all by conceding. We went very, very deep to make it happen today,” said Bardsley.

“Canada has the home crowd, excellent players, excellent manager,” Sampson said looking ahead to Saturday’s showdown in Vancouver. “So we really have to produce another massive England performance to get ourselves through to the last four.”

He also touched on something about his team that the Canadian team has similarly been facing—the pressure of expectations.

Canada Tops Group at FIFA Women’s World Cup
Favorites Take Charge in FIFA Women’s World Cup
“We take some unfair flak sometimes. The pressure we’re under to perform, and people forget there’s another bunch of teams in this tournament who are desperate to win this competition and give it their all,” Sampson explained. Both sides have emerged from difficult groups and neither team has had an easy game thus far.

“They’ve shown their defensive solidarity. Clearly they find it hard to score goals, but at the other end, they’re keeping that back door shut,” Sampson said reflecting on the matchup with Canada.

“It’ll be a tight game. John [Herdman] is an excellent manager, gets his teams really well organized,” Sampson said. “They’ve got some world class talent, but so have we.”

“It’s about which team delivers on the day, which team handles the pressure on the day. We’re fully aware of what Canada can bring,
we’ve played them often enough.”

England lost a pre-tournament warmup game to Canada 1–0 May 29, but that match seems like ancient history now with the run of form the English women have put together.

Canada edged Switzerland 1–0 Sunday night at B.C. Place in Vancouver to reach the quarterfinals. The winner came from the left foot of Josée Bélanger, who was back in her familiar attacking role after having played the opening three games at right back.

For Canada to unequivocally feel it has had a great tournament, it has to beat England and reach the semifinals. The same can be said for England.