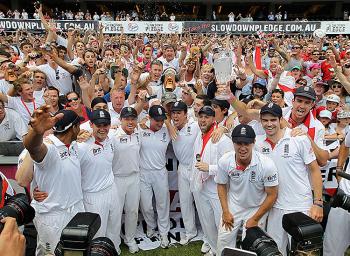 Ashes 2010: England celebrate with the Barmy Army at the SCG after winning the match and the Ashes Cricket Series against Australia. (Hamish Blair/Getty Images)
News

By Denis Charlton
Print
England won the fifth and final test in the 2010-11 Vodaphone Ashes Cricket Series, defeating Australia by an innings and 83 runs at the Sydney Cricket Ground. It was the first time in history that Australia has suffered three innings defeats in the same series.

At the start of play England looked to be having trouble maintaining the necessary focus required to take the last three Australian wickets, and despite the overcast sky seemed unable to achieve the lethal reverse swing that had brought the Aussies to the brink of defeat in the afternoon of the fourth day. Steve Smith had a point to prove to the selectors for the future, having done very little since being brought into the side, and Peter Siddle has been one of the few form players in the Australian team and always given a hundred and ten per cent. There was no way these two were going to throw in the towel, so England was going to have to bowl them out.

The partnership had reached an unlikely 86 runs and Australian supporters were just starting to wonder if, with the help of rain, a miracle might be on the cards. Graeme Swann finally remembered that the way to remove stubborn tail-enders is to give the ball some air and invite them to have a go. Like most fast bowlers with the pads on, Siddle simply couldn’t resist and hoofed the ball straight into the safe hands of Jimmy Anderson at deep mid wicket.

That was the fillip England needed and with the new ball due there was a good chance proceedings might now be concluded before lunch and, more importantly, before the rain returned. Ben Hilfenhaus couldn’t repeat his heroics of the first innings and managed just 7 before receiving a trademark Anderson away swinger that was far too good for him, and Matt Prior took his 23rd catch of the series behind the stumps. The England keeper has improved tremendously over the last couple of years and should be a fixture in the side for a long time to come.

Debutant Michael Beer came to the crease for the last rites and the Australian at least managed to stick around long enough for Steve Smith to complete a dogged half century. The inevitable was not long in coming with Beer late on to a fast straight one from Chris Tremlett and the Australian number eleven chopping the ball onto his stumps. The England celebrations began.

That England team spirit was again in evidence as they embraced one another in the middle of the MCG. The “barmy army” of England supporters, ironically occupying the area that used to be the old “hill” and the preserve of Aussie die-hards, predictably went wild with delight.

Interviewed by Channel Nine, England skipper Andrew Strauss said, “We came over here desperately wanting to win the series and obviously in Melbourne we retained the Ashes but we really wanted to finish with a bang here in Sydney.”

They certainly did just that with Australia being outplayed in virtually every facet of the game.

It did not take a genius to figure out the man of the match and player of the series. For his 189 at the top of the England innings in this test, and a total of 766 runs at an average of 127.66 for the series, Alastair Cook carried off both awards. It was the best English batting performance by an Englishman since Wally Hammond amassed 905 in the summer of 1928-29. The scale of Cook’s achievement is amplified when one looks at the next few on the list which includes the likes of Jack Hobbs and Herbert Sutcliffe in the same period as Hammond, with only Geoffrey Boycott from the post-war era–and that was all of 40 years ago.

There is no question that the Australian team, and indeed a large proportion of that proud cricket-loving nation, is deeply disappointed, but having come to terms with the loss of the Ashes in Melbourne, in Sydney they have been universally gracious in defeat. For that they are to be congratulated.

Australia has enjoyed a wonderful run on home soil which had to come to an end sometime. Maybe it is time to spare a thought for some of the Englishmen who took part in the five—yes five including a series whitewash in case you’d forgotten—unsuccessful English tours since the last triumph in 1986. Michael Vaughan at least survived to taste victory at home in 2005, but consummate professionals such as Darren Gough, Michael Atherton, Alec Stewart and many others gave their all match after match yet played out their entire careers without winning a series against the old enemy. Let Englishmen also remember their contribution to the great game as this thoroughly deserved series win by the current team is celebrated.