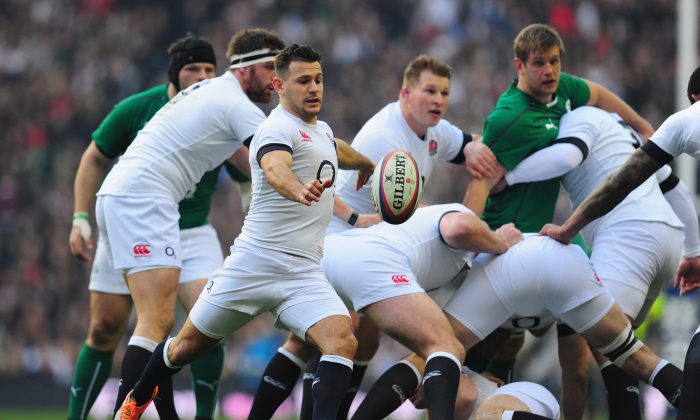 England scrum half Danny Care in action during the RBS Six Nations match between England and Ireland at Twickenham Stadium on February 22, 2014 in London, England. (Stu Forster/Getty Images)
Sports

England will face Wales in the 6 Nations rugby tournament in a Sunday, March 9 match.

The game will be played at Twickenham in London. Kick-off is scheduled for 3 p.m. GMT.

The game will be broadcast live on BBC One in the United Kingdom and S4C in Wales.

It will also be broadcast on Arena Sports in Bosnia, Croatia, Macedonia, Montenegro, and Serbia; TBC in Slovenia and Singapore; Prisa TV in Spain; Viasat in Sweden, Denmark, and Norway; and Romtelecom in Romania.

England and Wales are both currently tied at the top of the standings with Ireland and France. All of them have won two games and lost one.

This game is going to be so competitive that BBC termed it “a game for the ages,” saying that “Whether you are the father of the Wales captain or England’s wide-eyed mascot, Sunday’s Six Nations clash between the old rivals at Twickenham will get the juices pumping like no other fixture.”

Wales coach was among those that praised England half-backs Danny Care and Owen Farrell after they led England over Ireland, saying that “they are two fantastic players.”

“Their ability to make individual decisions, they’ve got a great combination between them and they complement each other,” he added to Sky Sports. “We just have to be on our wits because defensively we were really good against France.”

After this match, England will face Italy and Wales will face Scotland in round 5 on March 15.