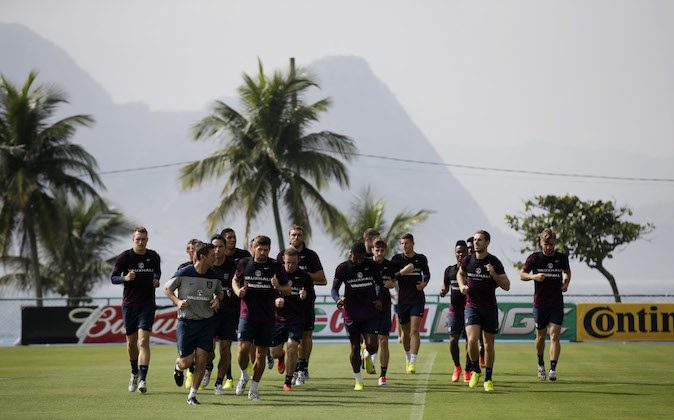 The game will be broadcast on BBC Radio 5 Live, BBC One, and BBC iPlayer in the United Kingdom, as well as RAI Uno in Italy.

Live stream is available on Watch ESPN (not for DirecTV subscribers).

World Cup Heads to Jungle for England vs Italy

RIO DE JANEIRO (AP) — The heat and humidity will be a factor, and so will the poor playing surface, when the Amazonian jungle city of Manaus hosts England and Italy in its first World Cup match on Saturday.

The most exotic of Brazil’s 12 host cities got one of the tournament’s best games, a Group D match between two former World Cup champions. It’s a match that neither team believes it can afford to lose.

With Andrea Pirlo and Mario Balotelli on one side working against Wayne Rooney and Steven Gerrard on the other, there will be plenty of superstar quality to marvel at and deflect attention from the subpar quality of the field.

Even the head groundsman at the Arena da Amazonia said the grass was “in bad shape.”

But the field may not be as stifling as the heat. Temperatures are expected to be about 32 Celsius (90 degrees Fahrenheit), and the humidity always seems to hover around 80 percent in Manaus. The team that can run for 90 minutes under those circumstances might just be the team that leaves the jungle city with three points.

Before coming to Brazil, England spent some time in Miami to acclimatize to the hot conditions. Now that they are in South America, it’s time to prepare for Pirlo.

“It’s important we don’t give him much time and space when we come up against him because he can influence any game,” said Gerrard, the England captain. “He has got that ability.”

Pirlo has been getting better with age. He’s 35 now, but only two years ago the midfield maestro was instrumental in leading Italy to the European Championship final — a run that included a penalty shootout victory over England in the quarterfinals.

The World Cup in Brazil could be his last major international tournament, however,

“I’m starting to get old. It would be useless to continue,” Pirlo said. “Of course, I’ll always be ready if they call me back, but if I’m on the national team and I don’t play that would really bother me. So it’s better to stay at home.”

With an abundance of talent surrounding Pirlo in Brazil, including the often uncontainable Balotelli, some people believe that just holding the Italians to a 0-0 draw would be a huge success for England heading into later group matches against Uruguay and Costa Rica.

England coach Roy Hodgson is not one of them.

“When we get the ball we are going to go for it, we are going to attack,” Hodgson said. “We are going to encourage our attacking players to do what we do. But we are also going to make it clear to them that they can’t go gung-ho at any time.”

The key for England to avoid losing may just be neutralizing Pirlo. But the key to winning is getting the most out of a young squad.

Hodgson dumped old-timers like Ashley Cole and called up a younger crop of players, including Alex Oxlade-Chamberlain, Ross Barkley and Raheem Sterling. So even though Italy faced England only two years ago in another big match at Euro 2012, there will be plenty of new faces in Manaus.

“I do feel this squad is better. The standard from 11-23 has improved,” Gerrard said. “We have better impact players this time around, and that gives me more confidence going into this game.”