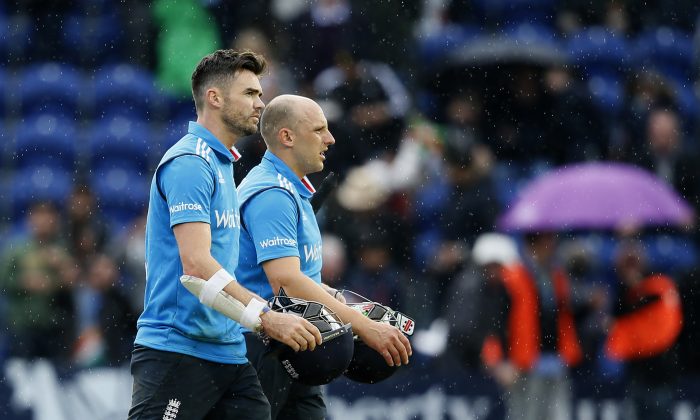 England is set to take on India in their 5 ODI series on Saturday, August 30.

The match will be broadcast on Sky Sports in the United Kingdom and STAR Sports in India.

It will also be broadcast on PTV Sports in Pakistan, Ten Sports in Sri Lanka, OSN in the Middle East, Fox Sports in Australia, and SuperSport in South Africa.

India is up 1-0 in the series after winning the 2nd ODI by 133 runs. The first match was canceled due to alternate weather. England previously won the 5 Test Series that started in early July and extended into Mid-August.

In that series, the first match was drawn, and India won the 2nd match by 95 runs.

India’s tour of England will wrap up on Sunday, September 7 in a T20 International.

Though India is up in this ODI series, the team lost opening batsman Rohit Sharma for the rest of the series due to a finger fracture, prompting the call-up of M. Vijay, who had flown home after the Tests.

ESPN reports that Vijay has not arrived in England yet, though, meaning Ajinkya Rahane will likely open, with Ambati Rayudu coming in at No. 4.

India’s Suresh Raina, third left, celebrates with his teammates after they defeated England in their One Day International cricket match at the SWALEC cricket ground in Cardiff, Wales, Wednesday, Aug. 27, 2014. (AP Photo/Alastair Grant)

But England has troubles of its own, points out David Hopps of ESPN, saying the team faces a dilemma in fine-tuning its attack for the rest of the series.

Chris Jordan is well-known for being streaky, while potential replacements Harry Gurney and Steven Finn have had issues of their own.

“Finn’s have been well chronicled – the collapse of his action in Australia last winter which meant that he did not play a single Test and left the tour early for remedial work on his action back at Middlesex,” Hopps said.

“Finn’s progress throughout the county summer has been solid, if unspectacular. By mid-July, he was able to discuss it for the first time, telling ESPNcricinfo that he began to over-analyse every aspect of his action and that Saker, who is generally regarded as a tactical rather than a technical coach, was unable to find a solution. At some point in this series, England surely must play Finn. There has been so much emphasis upon stable planning, particularly when the subject turns to the one-day captaincy of Alastair Cook, that it has been overlooked that the build-up to the World Cup offers England not just the chance to plan, but the chance to discover.”

Gurney, meanwhile, “would add variety to England’s attack by virtue of being a left-armer and who would also be a natural call-up on his home ground at Trent Bridge.”

Ahead of the game, it was unclear whether Gurney or Jordan would be in the lineup.