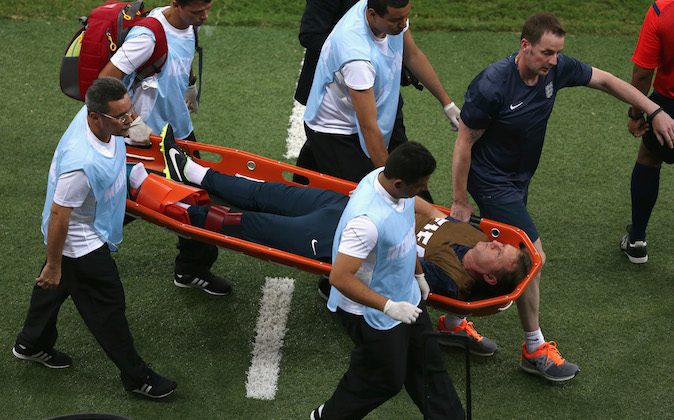 England trainer Gary Lewin is stretchered off the field after a leg injury during the 2014 FIFA World Cup Brazil Group D match between England and Italy at Arena Amazonia on June 14, 2014 in Manaus, Brazil. (Photo by Warren Little/Getty Images) England coach Roy Hodgson says "that was a very sad moment for us. In celebrating the goal he jumped up, landed on a water bottle and dislocated his ankle."
Soccer

Lewin appeared to have injured himself while celebrating Daniel Sturridge’s goal.

Lewin received treatment on the pitch before being carried off on a stretcher and taken to a Manaus hospital. He will return to England.

England coach Roy Hodgson says “that was a very sad moment for us. In celebrating the goal he jumped up, landed on a water bottle and dislocated his ankle.”

Check out an AP article on England.

RIO DE JANEIRO (AP) — English football players can deal with the weather if it’s wet and bleak, or cold and grim. But the heat and humidity is a different story, seen almost as a hostile environment.

Hot and sticky will be the conditions Saturday when England faces Italy in the steamy Amazon jungle port of Manaus, where the humidity averages 80 percent year around. A local adage says there are two seasons: summer and hell.

England has fretted about playing in Manaus since the World Cup draw six months ago.

England’s done what it can to prepare. There was a training camp last month in Portugal, friendly matches last week in Miami, and a base camp in sub-tropical Rio de Janeiro with three days of practice in the sun.

Players have been taking malaria pills and sweating — mostly over conditions in the jungle.

Forward Wayne Rooney was asked by Brazilian reporters why he was training in a long-sleeve shirt, expecting a weather-related answer.

Former Brazil coach Carlos Dunga offered the English some advice in an interview with The Associated Press.

“They are used to playing full speed for 90 minutes,” he said. “But they are going to have to pace themselves, know when to run and when to slow down. If not, they will exhaust themselves in no time.”

Brazilian soldier Gabriel Almeida, standing guard outside the England camp wearing a camouflage uniform, note it was only 27 degrees C (80F) and wondered about the fuss.

“It is a normal day and not that hot for me,” he said. “I guess the English players are used to rain, but not used to Brazil. It could be very hot in Manaus.”

English reporter Oliver Holt, who covers football for the Daily Mirror, called the English “overly obsessed about the weather.”

“I think deep down we might feel that Italy might be a little bit more prepared,” Holt said. “It might not be as foreign to Italy. They’re southern Europeans. They might be more confident about it. So we’re a little bit neurotic about it.”

Holt also speculated there might be another reason for all the concern.

“We’re not very optimistic about our chances here,” Holt said. “Maybe we’re getting our excuses in early.”