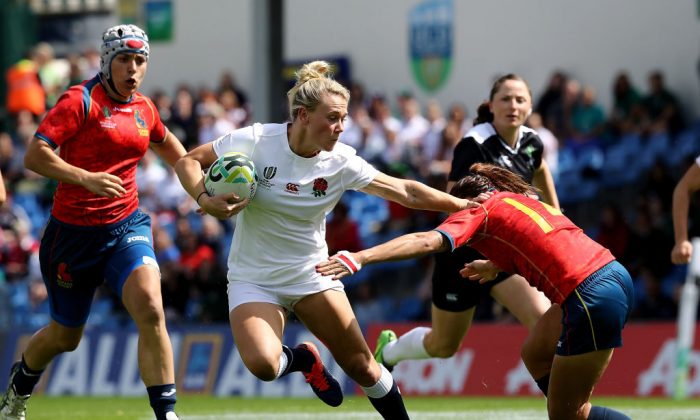 Megan Jones of England breaks through the tackle of Maria Casado of Spain to score a try during the Women's Rugby World Cup 2017 match between England and Spain on August 9, 2017 in Dublin, Ireland. (David Rogers/Getty Images)
HK Sports

England, New Zealand Get Women’s Rugby World Cup off to a flying start, while Asian Teams Find the Going Tough

The Pool rounds of the competition being played in Dublin, Ireland kicked off on August 9 in Dublin, Ireland, with the first round of matches Pool A: New Zealand and Wales, Canada vs Hong Kong, Pool B: England vs Spain, USA vs Italy, Pool C: Ireland vs Australia, and France vs Japan.

In the later matches: USA overcame Italy 24-12 and last time runners-up Canada cruised to a 98-0 victory over newcomers Hong Kong. Hong Kong started defensively but gradually increased possession and territory as the first half progressed, but the tries were coming at the other end with Canada crossing the try line 8 times and converting 3, to go into the half time break 46-0. The second half saw continued strong play by Canada racking up another 8 tries, finishing just short of a century at 98-0. It was a tough baptism for Hong Kong at the highest level in the sport.

Hong Kong refused to lie down, however, and Hong Kong coach, Jo Hull was pleased to see her players hold their heads high.

“We actually fought for the entire game, we asked them to play like warriors and they did. It’s the reality of where we are, we’re at a World Cup, we’re trying our hardest and I’m proud of them,” she said.

“We made some silly mistakes, which we will obviously look at, and it’s hard to play when you don’t have the ball, but we fought for the entire game.”

Ireland did a great job in just outpointing Australia 19-17 whereas France outplayed Japan 72-14.

Hong Kong supporters are hoping their team can have a good tournament, but no one is expecting a tumultuous outcome and the opening match result is not a great surprise. As first time entrants, and a team that has never experienced this level of the game before, no-one has great expectations. If Hong Kong can walk off the field with some positive experience, that will be a good result.  If they get close to winning in any of the matches it will be a bonus.

The playoff matches in Belfast will take place on Tuesday August 22 with the finals on Saturday August 26.