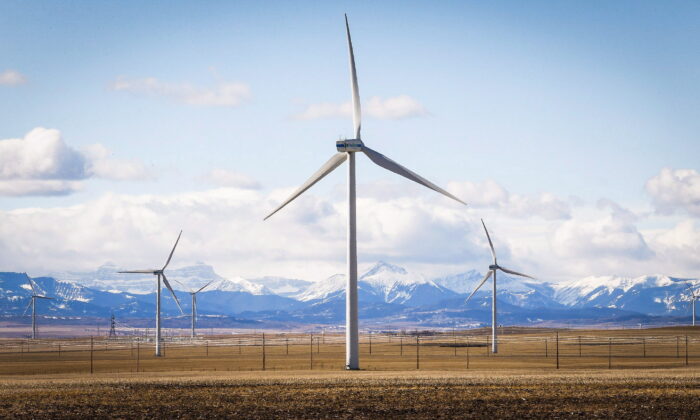 TransAlta wind turbines are shown at a wind farm near Pincher Creek, Alta., on March 9, 2016. (The Canadian Press/Jeff McIntosh)
Canada

Clean energy technology has become the latest frontier for geoeconomic competition between China and the West, panel hears
By Isaac Teo

Risks related to energy security won’t become a thing of the past in the context of transitioning to renewables, they will merely be transferred to the sources and providers of the green energy technologies, says a senior fellow at the Macdonald-Laurier Institute (MLI).

“What many people forget is that the risks to energy security do not disappear,” said Jeff Kucharski,  also an adjunct professor at at Royal Roads University in B.C.

“Instead, they shift toward the resources and resource providers whose inputs are essential to producing the wind turbines, solar cells, batteries, fuel cells, low carbon fuels, and other green technologies that we will increasingly rely on for reliable and affordable electricity.

“In short, energy transition will have many geopolitical implications and will reshape international energy relations.”

Kucharski made the comments during a webinar on Nov. 24 that brought together a panel of energy experts to discuss what a transition to green energy will look like in reality, and the consequences for getting it wrong.

Jane Nakano, a senior fellow in the Energy Security and Climate Change Program at the Center for Strategic and International Studies in Washington, D.C., said clean energy technology has become the latest frontier for geoeconomic competition between China and the West.

“Once upon a time, China was the world’s factory, sort of a supplier of these minerals and middles, but it’s no longer the case. China is starting to capture the higher end value of these clean energy supply chains or value chains,” Nakano said.

In her March research paper titled “The Geopolitics of Critical Minerals Supply Chains,” Nakano found that China accounts for over 90 percent of global wafer manufacturing, and is home to roughly two-thirds of the global polysilicon manufacturing capacity, a key raw material for building solar panels.

“When it comes to lithium ion batteries for electric vehicles, the majority of processing capacity for key components like cathodes, anodes—those things are under Chinese control, whether the factories are located in China or if it’s Chinese financed capacities in other parts of the world,” Nakano said in the webinar.

She noted that the demand within China for the critical minerals needed for clean energy technologies has also been rising, which means “they’re consuming much more of what they produce as opposed to exporting.” This has put pressure on Western economies dependent on mineral imports to secure their critical minerals supply chains, she said.

Equally important is that China recognizes that its critical mineral supplies can serve as geopolitical leverage, Nakano said. She cited the example of Chinese leader Xi Jinping and his then chief trade negotiator Liu He visiting the rare-earth processing facility in Jiangxi province during the height of the U.S.-China trade war in 2019.

“It was widely seen as a signal from Beijing to Washington that China has a commanding position on something that the U.S. is woefully dependent on China for,” she said.

Kucharski said despite the push for a transition to green energy, he foresees that the oil and gas sector will continue to play a major role in influencing energy security.

“Like it or not, fossil fuels made up 83 percent of global primary energy consumption in 2020, so nations still rely on them to power up their economies and sustain economic growth,” he said, adding that wind and solar, which are intermittent by nature, only made up 6 percent of the consumption.

“We still need stable baseload energy sources to stabilize the electricity grid and back up renewables,” he said. “That means we’ll need nuclear power as well as oil and gas with abatement technologies for several more decades.”

Kucharski noted, however, that the majority of global oil and gas production is controlled by the state-owned national oil and gas companies of authoritarian regimes such as Russia, Iran, and Venezuela.

“Some of these countries have weaponized their supply capabilities by threatening to slow or stop crucial supplies, manipulate prices, or exert political leverage over import dependent countries,” he said.

Petra Dolata, associate professor at University of Calgary and an energy historian, said energy transition by governments has always been “messy” historically, noting that “unintended consequences is a huge piece of energy transitions.”

“Even if governments have a certain vision that they want to put forward, the unintended consequences are possibly much, much bigger than anything that we can anticipate,” she said.

Moderator Heather Exner-Pirot, an MLI fellow who works on strategy and research for pro-development indigenous groups in Western Canada, questioned whether countries are preparing adequately for the transition, which will involve retraining a large portion of the workforce.

“That’s where the pain points are going to be,” she said.