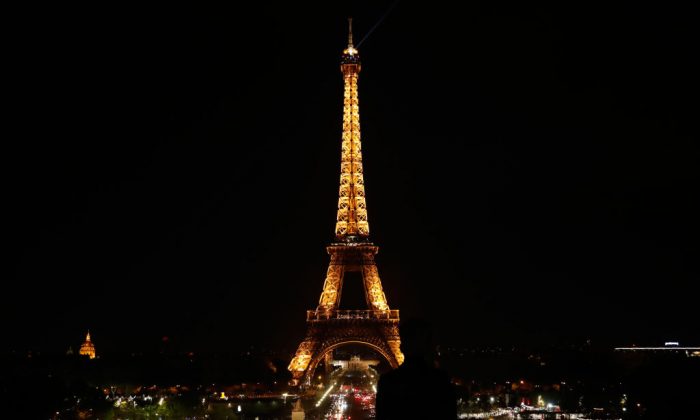 Visitors to Paris this fall will be disappointed because the Eiffel Tower will go dark early to save power, amid the worst energy crisis to hit the continent in almost half a century.

The tower is one out of the city’s many monuments and government buildings that will be plunged into darkness in the French capital earlier in the evening.

The city plans to turn off the exterior lights at every municipal building starting at 10 p.m., but will keep public lighting on for safety reasons.

The mayor of Paris, Anne Hidalgo, announced, on Sept. 13, that the city is planning to reduce energy consumption by 10 percent to save power during the winter and soften the blow of rising costs by an estimated $10 million.

“Lights out from 10 p.m. of all municipal buildings, such as the Town Hall or the borough town halls. To continue to ensure the safety of Parisians, public lighting is maintained. The illumination of the Eiffel Tower will now end at 11:45 p.m,” said Hidalgo, in an English translation of her tweet.

Beginning on Sept. 21, the Eiffel Tower’s nightly illumination display, which is loved by millions of visitors to Paris every year, will be turned off at 11:45 p.m., after visiting time has ended.

The special lighting in the evening consumes 4 percent of the monument’s annual energy expenses, according to its website.

Hidalgo has asked the national government to adjust the lighting at other monuments in Paris, such as the Pantheon and the Arc de Triomphe.

“The city must lead by example,” Hidalgo told Libération.

“Paris will be at the forefront to act.”

According to the city’s website, if energy consumption were reduced to 2004 levels, the rise in energy prices would cost Paris an additional €30–34 million (roughly $31–36 million) this year,

The city will also lower the temperature in public buildings by 1.8 degrees Celsius, to 18 degrees (64.4 degrees Fahrenheit), excluding those catering to sensitive groups, such as day care and nursing homes.

The heating of government owned buildings, excluding social housing, will postponed to the start of November, while municipal swimming pools will be a degree cooler.

Hot water in administrative and other public buildings will be cut, while still excluding those housing the same sensitive populations.

Privately owned buildings, such as large apartments, hotel chains, supermarkets, department stores, and businesses, will also be asked to reduce their winter energy consumption by 10 percent this winter.

“The need for energy sobriety and ecological transition is essential. Faced with the risk of shortages, a national sobriety effort at all levels must be put in place,” said the official Paris government website.

The suspension of Russian gas shipments through the Nord Stream 1 pipeline earlier this month, at the end of one of the hottest summers and worst droughts on record, has caused energy supplies to crash and prices to surge across the European Union (EU).

The reduction of natural gas supplies after the European Union imposed on Russia for its invasion of Ukraine has caused pain for households and industries across the bloc.

The rise in energy inflation and fears of low gas supplies, as winter draws near, has forced countries across Europe to impose conservation measures and provide relief for consumers and businesses.

France, like the rest of its neighbors, is now facing the specter of power shortages, rationing, and blackouts, as demand for increasingly expensive energy is expected to surge during the heating season.

France, which was the largest exporter of energy in Western Europe, was having problems with its own domestic supply, as it faced issues with its nuclear and hydropower plants that have reduced production.

Energy prices in France, at the end of August, hit nearly €1,000 per megawatt hour, 12 times the price recorded at the same time a year ago.

French President Emmanuel Macron warned the nation, at the end of August, that the French public may react poorly to what he calls the “end of abundance.”

“I believe that what we are experiencing is of the order of a great shift or a great upheaval,” declared Macron.

“Basically, we are living through the end of abundance, that of costless liquidity—we will have to draw the economic consequences—that of products and technologies that seemed perpetually available to us, the break in value chains,” he continued.

Macron called for the French public to reduce 10 percent of its energy use in order to avoid energy rationing and cuts during the winter,

French Prime Minister Elisabeth Borne told French companies in the nation last month that they would have to create energy-saving plans by the end of September as the energy crisis caused by the war in Ukraine shows no sign of easing.

Multiple crises brought about largely by the political leadership is causing much anger toward the public authorities, as the energy shortages wreak havoc and cause poverty across the continent.

The EU is looking to pass several proposals to ease the crisis.

The European Commission, for example, announced on Sept. 14 an emergency proposal that would require members of the EU to cut overall electricity usage by 10 percent, as well as impose a 5 percent mandatory reduction during peak hours.

The plan hopes to raise  approximately €140 billion through a windfall tax on energy companies by skimming from excess production.