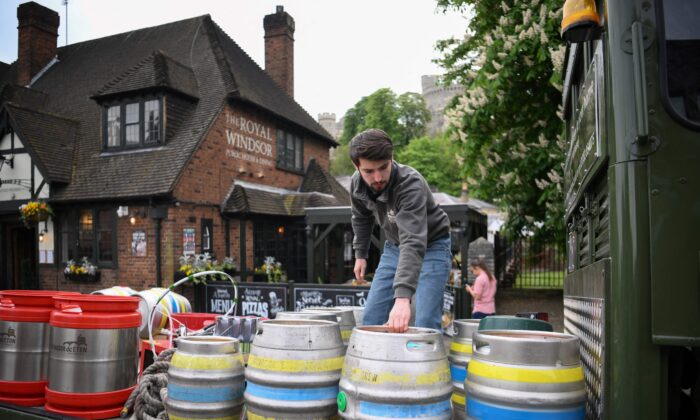 A workers picks up draft barrels of beer from a horse-drawn delivers to a pub in Windsor, England, on April 28, 2022. (Daniel Leal/AFP via Getty Images)
UK

Pubs will have no other option but to close owing to “out of control” energy bills, with upwards of 300 percent price hikes possible, UK brewery and pub bosses have warned.

Leaders of six of the country’s largest breweries and pub businesses involved in the British Beer and Pub Association (BBPA) are pressuring the government to take immediate action over skyrocketing prices.

Some English pubs date as far back as the 8th century, having served beer through Viking raids, the Black Death, and the Second World War.

But many were forced to call last orders during national lockdowns that caused closures and reduced demand.

Chief executives of JW Lees, Carlsberg Marston’s, Admiral Taverns, Drake & Morgan, Greene King, and St. Austell Brewery, who sit on the board of the BBPA, called for an urgent support package that effectively caps the price of energy for businesses to avoid what they called “real and serious irreversible” damage to the industry.

In an open letter to Prime Minister Boris Johnson on Tuesday (pdf), they highlighted a recent report that found one licensee of a small community pub had a £33,000 increase in its energy costs over the previous year.

Nick Mackenzie, the boss of Greene King, one of the UK’s largest pub groups with over 3,100 pubs, said in a statement that pubs face “being unable to pay their bills, jobs being lost and beloved locals across the country forced to close their doors, meaning all the good work done to keep pubs open during the pandemic could be wasted.”

The bosses also pointed to a perfect storm of surging commodity prices and a doubling in the cost of malt, as well as CO2, gas, and energy costs nearly tripling since 2019, which Paul Davies, CEO of Carlsberg Marston’s, said will be a “crisis far graver than that which we faced during the COVID lockdowns of the past few years.”

Emma McClarkin, chief executive of the BBPA, said, “This rise in energy costs will cause more damage to our industry than the pandemic did if nothing is done in the next few weeks, consumers will now be thinking even more carefully about where they spend their money.”

“There are pubs that weathered the storm of the past two years that now face closure because of rocketing energy bills for both them and their customers,” she added.

Martin Robinson, co-owner of Ye Olde Fighting Cocks pub in St. Albans, told The Epoch Times that his gas and electric bills had increased from £1,800 a month to £5,500.

Robinson said the high energy prices almost made it “pointless to be open,” adding that another planned increase in October by 80 percent could “wipe everyone out.”

“I think people don’t realise how many places are about to close,” he said.

“We burn gas around six hours a day, we haven’t even started using the central heating,” he said. “Firewood may be cheaper than gas to keep the place warm which is just crazy when you think about it,” he added.

Reputed to be the oldest pub in England, Ye Olde Fighting Cocks claims to have been in business since 793 AD, though the main structure of the building was built in the 11th century and originally used as a pigeon house.

“The idea of the traditional pub, a lot of that is going to go,” Robinson said. “We are quite lucky, we are in an affluent area, we have tourism here. But the standard village country pub, they are going to go, and not be around anymore.”

Rita McCluskey, the licensee of Adam and Eve, the oldest pub in Norwich, told The Epoch Times that she was “not particularly confident” and “didn’t really don’t know what can be done.”

She has owned the pub for 22 years, which was first recorded as an alehouse in 1249. McCluskey said she has also been hit by the large energy costs as well as a lack of footfall from current strikes from barristers and the railway industry.

“The last thing I want is for this to close,” she said. “Everything is in the air because nobody will make a decision until the new PM is in power. Things are really up in the air. It’s all speculation.”

A government spokesman told The Epoch Times by email that “no national government can control the global factors pushing up the price of energy and other business costs,” but that it will continue to support the hospitality sector in navigating the months ahead.

“That includes providing a 50 percent business rates relief for businesses across the UK, freezing alcohol duty rates on beer, cider, wine, and spirits, and reducing employer national insurance. This is in addition to the billions in grants and loans offered throughout the pandemic,” he said.