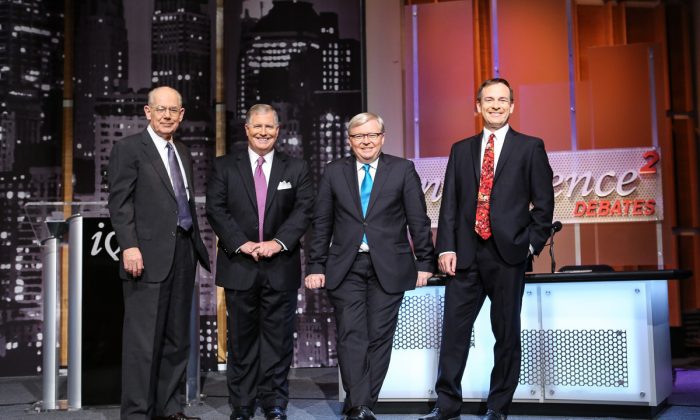 NEW YORK—A former prime minister of Australia, a political science professor, and two senior members from United States-based think-tanks took turns at the lectern at a packed auditorium in Kaufman Music Center on Oct. 14 to debate a topic of the times: are China and the United States long-term enemies?

The debate was hosted by nonprofit and nonpartisan group Intelligence Squared U.S. and moderated by John Donvan, author and correspondent for ABC News.

The debaters had to sway the audience to their views over three standard debate segments, a half minute “volley” round, and questions and answers from the floor. They argued and framed the present and future of U.S.-China relations along several themes: survival or prosperity, determinism or human agency, security or diplomacy.

It’s a dangerous world, but it’s not a Risk board.
— Robert Daly, Director of the Kissinger Institute, Woodrow Wilson Center

Backing the motion was John Mearsheimer, a political science professor from the University of Chicago, and Peter Brookes, Senior Fellow at the The Heritage Foundation. Robert Daly, Director of the Kissinger Institute based at the Woodrow Wilson Center in Washington, D.C., and former Australian Prime Minister Kevin Rudd took up the opposing camp.

The proposition built their case on a theory of international relations: states are ultimately concerned about their survival, the “highest value” factor that they would do everything to preserve.

To that end, China and the U.S. have been engaging in an “intense security competition that involves arms races, crises, proxy wars,” said John Mearsheimer, who laid out the theoretical groundwork.

In counter, the defense argued that humans, not states, make decisions, and that the future is not bound by a theory of international relations.

“Politics, international politics, is the art of looking for trouble, finding it everywhere, diagnosing it incorrectly and applying the wrong remedies, so says Groucho Marx,” Kevin Rudd said, drawing laughter from the audience.

Rudd, who plumped the virtue of diplomacy in defusing tensions and rivalrous relations, later juxtaposed China’s lower military budget to the U.S. ($200-225 billion compared to $700 billion), and the state of the Chinese navy (no carrier battle groups) to the U.S. Pacific command.

“Let me tell you who I’d be backing any day of the week, and for the next 30 years plus,” Rudd continued.

In his concluding statement, Mearsheimer warned that the defense’s case was predicated on there being strong, visionary leaders in China and U.S. over the next several decades, something that is impossible to predict.

“There are a lot of moving pieces out there. There are a lot of ways you can get into a war, but what their theory depends on is having Bismarck here, there and everywhere.  That’s just not going to happen,” Mearsheimer said.

“It’s a dangerous world,” Robert Daly admitted, “but it’s not a Risk board.”

“We must build and position our forces wisely, yes, but we must not reduce our collective life to a brutalist survival imperative.”