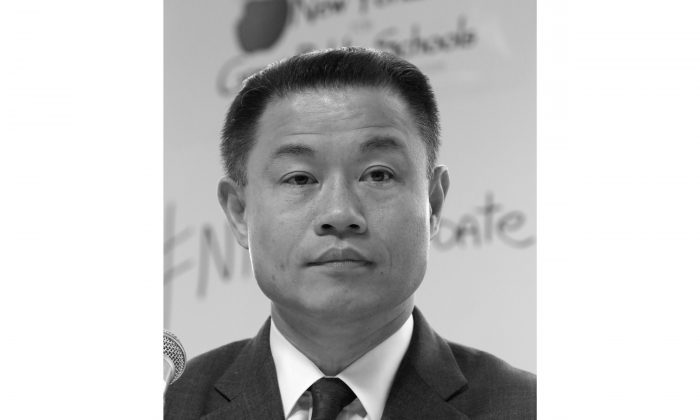 NEW YORK—Fresh off his endorsement from DC 37, the city’s largest public employee union, Democratic mayoral candidate and city Comptroller John Liu, is already making promises he may have difficulty living up to.

With a throng of DC 37 supporters in green shirts behind him on the steps of City Hall, Liu promised at least some retroactive pay raises for expired city union contracts. Full payment of retroactive wages could come to as much as $7.8 billion. Over 100 worker contracts have not been renegotiated for years, while liabilities are accruing for the city.

“Moving forward there will be negotiations,” Liu said. “It will probably not be the entire amount of the retroactive activity, but it will not be zero either.”

The promise drew cheers from the DC 37 crowd, whose more than 50 unions have been without a contract for years. When asked how he would pay for retroactive pay, which many experts have said could not come without cuts in city funding or tax hikes, Liu stammered, choosing to criticize Mayor Michael Bloomberg instead.

“This should have been addressed a long time ago,” Liu said. “For him to say we are having a balanced budget is just disingenuous at best.”

When pressed, Liu said his office has found money from overpaid consultants, but did not offer an amount. Liu vowed he would find more.

He also promised to raise taxes on New Yorkers making over $500,000 but at the same time decrease taxes on the working class. He said the net would result in money for union workers, claiming his measures would create $250 million to $1 billion in additional revenue, however he provided no specifics.

Liu said he would talk about the specifics when he got to City Hall, adding Bloomberg still has seven months to negotiate.

Since releasing the Executive Budget in May, Bloomberg has repeatedly said there is no room in the budget for retroactive pay raises. On May 28, the mayor spoke at length to the press during an off topic question and answer about the expired contracts and the retroactive pay.

“I think it is fair to say our administration has held the line on retroactive raises and it will be up to the next mayor to continue to hold the line or to increase taxes dramatically and cut services dramatically,” Bloomberg said. “Anyone that says they can do that without doing those two things should not be running for mayor because they do not know how to read the financial statements and understand how this city works.”

Labor wages, health benefits, and pensions for city workers as a whole represent 55 percent of the fiscal year 2014 budget.

In April, to alleviate blooming health care costs, the mayor suggested city unions pay for a portion of the costs, something he said nearly every other New Yorker does.

Former Congressman Anthony Weiner, who recently jumped into the mayoral race, agrees with Bloomberg. In his Keys to the City, Weiner suggests city workers pay a small portion of health premiums, including higher premiums for those who smoke.

Speaker Christine Quinn has said she will address the issue of expired union contracts, however, on the issue of retroactive pay, she avoided making comment. “Anyone who is running for mayor and wants to be able to negotiate contracts with the unions, is not going to negotiate those contracts in the press,” Quinn said on May 29.

This is not the first campaign promise Liu has made that he will have difficulty living up to.

But neither Liu, nor any city authority, has the power to make such a change, the Epoch Times found.

The minimum wage levels are set by the state, and the New York City mayor does not have the authority to set a minimum wage.

Liu’s former campaign finance manager and another campaign worker were recently found guilty by a jury in a Manhattan Southern District federal courthouse of conspiracy to commit wire fraud by using straw donors to defraud the city of matching funds that would have financially supported his campaign.