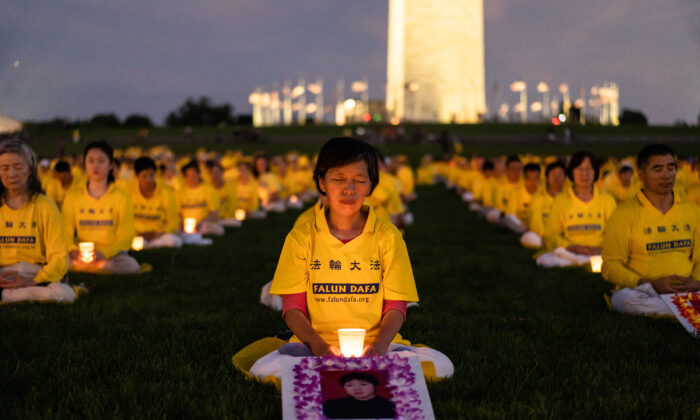 Beijing is conducting genocide against not only Uyghurs, but also Falun Gong practitioners. Economic sanctions on Xinjiang should be broadened to all of China.

The Chinese Communist Party’s (CCP) genocide against the Uyghurs is now well-known. Then-U.S. Secretary of State Mike Pompeo made the designation in January 2021, just as the Trump administration departed. Current Secretary of State Antony Blinken confirmed it two months later.

The genocide against Falun Gong is less recognized.

However, a 2019 international tribunal held in London found extensive evidence that contributes to a designation of genocide perpetrated against Falun Gong. Additional evidence, including in Chinese state media reports as recently as July 12, establishes the intent of the regime to “eradicate” the spiritual practice.

China’s increasingly totalitarian political system has repressed at least tens of millions of Falun Gong practitioners, including through arbitrary detention, torture, and forced conversion. One of the CCP’s most shocking tools of genocide is forced organ harvesting, in which a prisoner is executed, or brought live to the operating table, when a patient needs an organ that matches the blood type of the detainee.

In April, the peer-reviewed American Journal of Transplantation published evidence of this forced organ harvesting, including through the murder of live prisoners.

It illustrates one of the worst threats from the CCP, which is the compromise of not only Party members or even Chinese citizens, but people around the world who believe they can derive benefits from China because of its repressive political system and lax protection of individual rights.

Those benefits sometimes include life itself, even as a Chinese prisoner is deprived of the same.

“Transplant tourism” to China is an example in which the vast majority of organs come from non-consenting prisoners. Patients from around the world fly to China to purchase the organs they can’t obtain through years-long waitlists in their home countries.

According to a Chinese official in charge of national organ transplants in 2015, 80 percent of the 8,600 transplants in the prior year were from prisoners.

Despite sophisticated CCP attempts to improve the international perception of China’s transplants, including the faking of scientific data, there is little evidence that the practice of sourcing organs from prisoners has changed.

In fact, there is new evidence that the donor pool for forced organ harvesting expanded due to the mass detention of Uyghurs and the systematic collection of their blood samples.

But the primary source of organs is Falun Gong adherents, because they typically have healthier organs due to their spiritual lifestyle, which avoids alcohol and smoking.

Laws should protect them, but most do not.

International frameworks that seek to restrict organ trafficking are lacking in specificity and enforcement. Countries from which patients travel for organ transplants have included some of the wealthiest and most powerful, including the United States, Japan, Australia, Canada, Israel, Oman, and Saudi Arabia.

Only a few nations outlaw organ trafficking. In May, the United Kingdom passed a law against its citizens and residents traveling abroad for organ transplants that would be illegal in Britain. A similar bill has been proposed in the United States.

But we must go further.

Just as we are increasing sanctions on Russian exports across the board to stop its war in Ukraine, we can sanction China to stop its human rights abuse. Current sanctions against China are limited in scope.

The strongest are against goods made with forced labor from the Xinjiang region, yet Xinjiang is just one of 31 provinces, autonomous regions, and municipalities. Xinjiang businesses can still export to the United States by disguising their goods as made with consensual labor from one of 30 other locations in China.

And as genocides against Uyghurs and Falun Gong are conceived and driven at the national level, sanctions on China shouldn’t be limited to particular regions. Neither should they focus on individuals who, when senior enough, are largely unaffected. These kinds of sanctions are arguably symbolic rather than having large economic effects. For the latter, all of China must be sanctioned, which would put maximum pressure on the regime in Beijing.

Our international allies should follow, imposing ever broader sanctions that would result in a gradual decoupling of China from international financial and trading systems if Beijing refuses to improve its human rights.

That gives the CCP a clear choice: Improve human rights in China or join countries such as Russia, Iran, and North Korea as international pariahs.