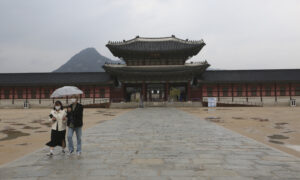 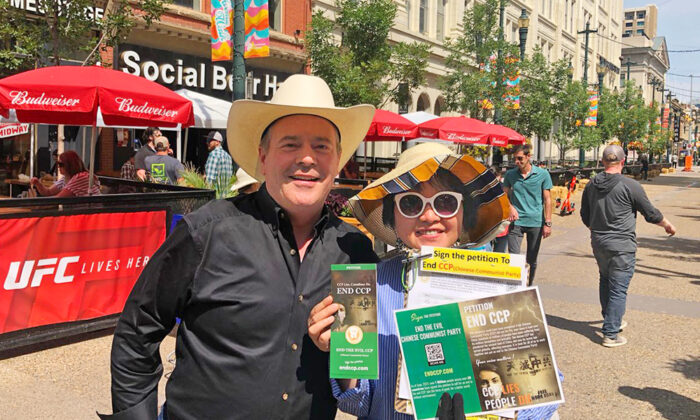 Alberta Premier Jason Kenney (L) voices support for an end to the Chinese communist regime, in downtown Calgary on July 11, 2021. Kenney stopped by to chat with Wenwen Guo, a volunteer with the Global Service Centre for Quitting the Chinese Communist Party, while Guo was collecting signatures for the “End CCP” petition. (Courtesy of Wenwen Guo)
Canada

When Calgarian Guo Wenwen went downtown to raise awareness of her cause on July 11—as a volunteer of a global grassroots effort to end the communist regime in China—little did she expect she would have a chance to meet Alberta Premier Jason Kenney himself, a major supporter of that cause.

It was a sunny afternoon during the busy opening weekend of the Calgary Stampede. Guo, a volunteer with the Global Service Center for Quitting the Chinese Communist Party (CCP), was standing on the street giving out flyers to passersby and collecting signatures for the centre’s “End CCP” petition, just as she had done on numerous occasions over the past few months.

Around 2 o’clock, seeing so many people walking by, she held up her petition board and flyers and called out to the passersby, “End CCP.” Out among the crowd walked a man who came straight over to her and enthusiastically shook her hand.

“I was so surprised. It was Premier Jason Kenney,” Guo recalled.

As Kenney was shaking her hand, he called out in a loud voice, “End CCP,” and even encouraged the people around them to call out together, “Falun Dafa hao,” which stands for “Falun Gong is good” in Chinese.

Falun Dafa is another name for Falun Gong, and “Falun Dafa hao” is a popular phrase people say to help counter the CCP’s hate propaganda against Falun Gong. It’s a practice for the mind, body, and spirit rooted in the ancient Chinese cultural tradition. Centring on the tenets of “Truthfulness, Compassion, Forbearance,” Falun Gong also includes several meditative exercises. But under the communist regime, it has been a major target of persecution since 1999

Kenney, from before his federal cabinet minister days under Prime Minister Stephen Harper, through to his current tenure as Alberta premier, has consistently condemned the human rights abuses committed by the CCP.

Last July, on the 21st anniversary of the persecution, the Alberta premier made a point of issuing a statement condemning the CCP’s persecution of Falun Gong and showing solidarity with the Falun Gong community.

Guo’s flyers and petition and the EndCCP.com website refer to the COVID-19 coverup, the Cultural Revolution, the Tiananmen Square Massacre, the loss of freedoms and democracy in Hong Kong, the persecution of faith and ethnic groups, and large-scale forced organ harvesting of prisoners of conscience, among other topics.

Since 2004, the Global Service Center, a non-profit charitable organization registered in the United States, has coordinated the worldwide movement to help Chinese people quit the CCP and its two affiliated organizations: the Communist Youth League and the Young Pioneers.

The centre launched the “End CCP” petition in September 2020, and since then, the petition has collected roughly 70,000 signatures in Calgary alone, Guo said. And more than 1.1 million people globally have signed the petition online.

“It’s to let the people around the world know how much harm the CCP has brought about, and that the CCP has infiltrated [countries] around world. People need to stand up against it.”