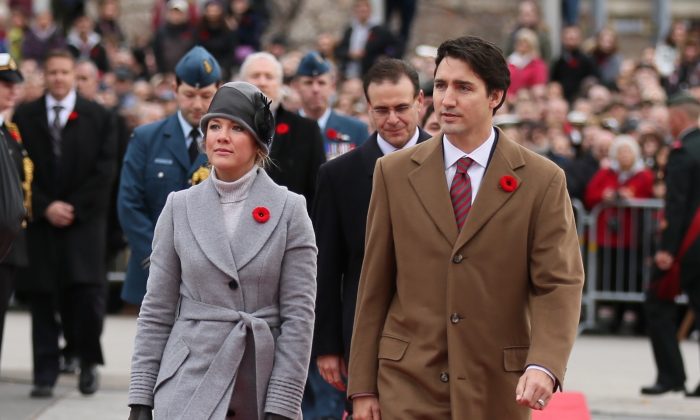 Nearly 200,000 criminal complaints have been filed against one of China’s former leaders, and Canada’s former environment minister hopes Prime Minister Justin Trudeau can lend them some support.

Peter Kent, who now sits as an opposition MP and also chairs the Parliamentary Friends of Falun Gong, hopes Trudeau can encourage Chinese leader Xi Jinping to ensure China’s courts do their job.

That would include investigating criminal complaints filed against Jiang Zemin, the leader of the Chinese communist regime from 1993 to 2003.

“I just want to encourage PM Trudeau that besides the handshakes and smiles of diplomacy, that there is also room for very frank discussion of issues that concern us, like human rights,” Kent said in an interview.

Jiang is a political opponent of Xi’s and the head of a faction of the Chinese Communist Party that Xi has been systematically purging and prosecuting for corruption.

In 1999 Jiang initiated and presided over a campaign to eradicate Falun Gong, a spiritual practice based on Chinese traditions predating the communist revolution in that country. The practice had grown to between 70-100 million adherents, outpacing even the membership of the Chinese Communist Party.

Kent said that with Canadians of Chinese descent accounting for nearly 5 percent of the population, the massive crackdown and rampant abuses in China affects people here also. He points to Toronto resident Paul Li as an example.

Li’s father, Li Xiaobo, was recently sentenced to eight years in prison in China for sharing materials exposing the persecution of Falun Gong in China.

“He has been detained for some years and has been a victim. Canadian diplomats have made interventions on his behalf in the past,” said Kent.

Unfortunately, even those interventions didn’t guarantee Li Xiaobo a free trial. Observers from the Canadian consulate in Chongqing were barred entry to the proceedings earlier this year. It is the elder Li’s second eight-year sentence for exposing the persecution of Falun Gong, which includes arbitrary arrest, imprisonment, torture, and death.

Xi passed legal reforms earlier this year that paved the way for Chinese citizens to sue Jiang, and Kent noted those as a sign of progress.

“We, on a very respectful basis, encourage them to continue those reforms,” he said.

Kent issued a statement on the possibility that Trudeau could meet with Xi as early as G20 leaders’ summit this weekend in Turkey.

He says in the statement that the allegations in the criminal complaints against Jiang need to be investigated.

“The allegations are very serious: torture, rape, murder, genocide, state-sanctioned organ harvesting and trafficking, forced labour, and more. (As of September, 2015, some 180,000 criminal complaints have been filed with Chinese courts).”

Kent also notes that Jiang is the one responsible for the brutal crackdown on Falun Gong adherents that has continued since 1999.

“The ruthless, deadly, extra-judicial campaign that ensued was powerfully documented in the 2006 Kilgour-Matas Report and updated in the 2009 publication, ‘Bloody Harvest – The killing of Falun Gong for their organs.'”

That report, the groundbreaking work of human rights lawyer David Matas, and former MP and secretary of state David Kilgour, was the first investigation of allegations that the Chinese regime was killing Falun Gong prisoners of conscience in organ transplant operations.

Investigative journalist Ethan Gutmann has since traced the practice of forced organ harvesting to Xinjiang, interviewing sources in his 2014 book “The Slaughter” who witnessed it being used on Uyghur dissidents prior to the crackdown on Falun Gong.

Beyond ensuring criminal complaints against Jiang are investigated, Kent would also like Trudeau to encourage Xi to end the campaign of persecution against Falun Gong adherents immediately.

Kent noted that under former Prime Minister Stephen Harper, the issue of human rights was frequently discussed with Chinese officials.

Kent said that was something nearly all ministers made a point of raising during their trips to China, regardless of the portfolio they were addressing.