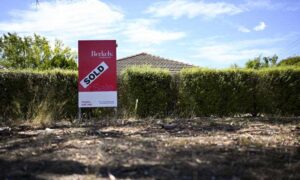 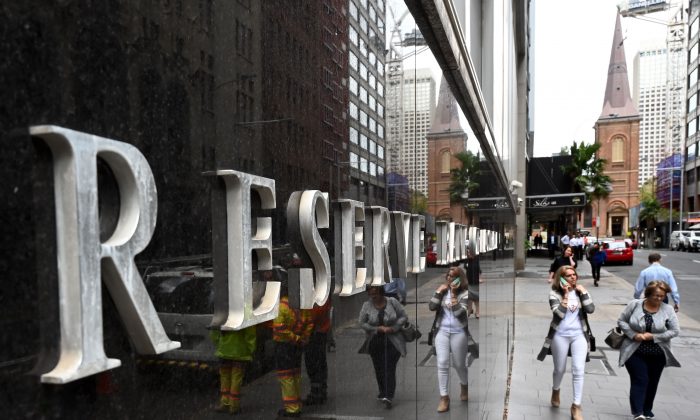 Pedestrians are reflected in the wall of the Reserve Bank of Australia in Sydney on April 2, 2019. Australia's central bank kept interest rates on hold and maintained a neutral bias even as it was less upbeat about the economy amid slowing growth. (SAEED KHAN/AFP/Getty Images)
Australia

At the monthly meeting, the RBA upgraded its economic forecast while keeping the cash rate at near zero percent—which will remain at current levels until “2024 at the earliest.”

“The economic recovery in Australia has been stronger than expected and is forecast to continue,” Philip Lowe, Governor of the Reserve Bank of Australia, said. “This recovery is especially evident in the strong growth in employment, with… the number of people with a job now exceeding the pre-pandemic level.”

“The Board is committed to maintaining highly supportive monetary conditions to support a return to full employment in Australia and inflation consistent with the target,” Lowe said. “It will not increase the cash rate until actual inflation is sustainably within the 2 to 3 per cent target range.”

While economic activity has had a strong recovery, inflation has remained subdued across most of the economy. Recent CPI data from the Australian Bureau of Statistics (ABS) show a 0.6 percent increase in inflation over the March quarter.

The central bank will also continue to monitor the house borrowing trends and the market. Lowe has reiterated that the bank does not move interest rates to target house prices, but rather focuses on the economy as a whole.

House values reached 2.8 percent growth in March, the fastest monthly growth in over 30 years. Many economists have also forecasted massive surges in house values over this year, with some estimates as high as 17 percent.

The housing market has been driven partly by cheap borrowing costs, meaning consumers are more willing to shoulder higher levels of debt.

Citi economist Josh Williamson believes property prices will jump 15 percent this year, then plunge down to 1.5 percent next year.

“With wages growth unlikely to rise meaningfully and interest rates not expected to move lower, we believe affordability has peaked, and it will likely worsen in the coming months,” Williamson told The Australian.

ANZ research (pdf) found that job advertisements have continued their upward trend for the 11th month in a row.

“Businesses looking to hire new workers are, on the whole, unlikely to be those that were heavily dependent on the JobKeeper payment,” ANZ senior economist Catherine Birch said.

The RBA’s full monetary policy statement will be released on Friday.