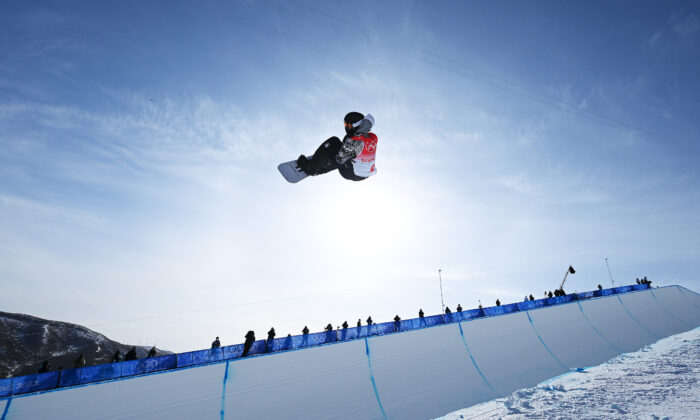 Shaun White took his helmet off and waved to the cheering crowd following his third and final run of his Olympic career Friday, Feb. 11, at the Beijing Olympics; finishing fourth in the snowboarding half-pipe event at the Genting Snow Park.

The five-time Olympian has become synonymous with the sport and is considered the greatest of all time, during the rise in popularity of snowboarding in the last few decades.

“I’m sure every single person who competed today looked up to him for a very long time,” said bronze medalist Jan Scherrer of Switzerland. “It’s a very cool moment.” The other snowboarders waited to shake hands with White following his final run.

The 35-year-old White has won the most Olympic gold medals in half-pipe snowboarding, including Torino 2006, Vancouver 2010, and Pyeongchang 2018; 2018 was his big come-back victory after placing fourth at Sochi in 2014.

White has also been a professional skateboarder, and holds the world record for the most X-Games gold medals; winning a medal every year since 2002. His total medal count is 18, 13 gold, three silver, and two bronze.

On Friday, White was in second place after an excellent second run. However, two eventual medalists would surpass him; as he fell on his third run attempting a comeback, but clipped the wall as he was landing his second aerial.

“I’m not upset about the result,” said White. “I obviously would love to put down that last run.”

White explained that he had tightening in his “back leg for some reason, it was giving out on every run.”

In his last attempt, “I couldn’t hold on, and a lot of emotions hitting me right now,” added White. “It’s the cheer of the crowd, and some kind words from my fellow competitors, I’m so happy.”

White thanked “everyone at home,” and the “snowboarding” community.

“I can’t wait to see where this sport goes,” continued White. “It’s getting wild. I’m proud to stand and cheer on [Ayumu Hirano] from here on, and wish him, Scotty [James], and everyone the best.”

Hirano, from Japan, won his first gold medal on his final run with a near-perfect score of 96, which included a pair of triple-corks; consisting of twisting three head-over-heels spins. James, of Australia, captured silver.

It’s rather ironic that White came from behind to win gold in 2018, displacing Hirano’s lead to silver and James of Australia to bronze. Hirano also won silver in 2014.

This generation of snowboarders grew up idolizing White, “I hoped I could send a message to [White] by showing my ride to him,” said the heir apparent Hirano.