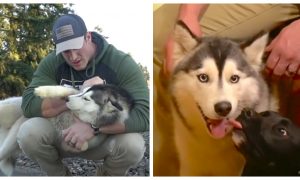 ‘Oh, Puppers, Come Back!’ Video Shows Dramatic Dog Rescue in the Middle of an Icy River

No one was luckier than this small dog rescued from a frozen river by the U.S. Coast Guard in Milwalkee, Wisconsin March 20.

A man noticed a small black dog in the middle of the Milwaukee river while walking around the city. The dog was on stuck on a piece of ice in the partially-frozen river with debris and garbage all around him. The dog had no way to escape his icy fate. That’s when the Coast Guard and police stepped in to save the trapped dog.

Getting a yellow safety raft, two rescue workers braved the freezing temperatures of the Milwaukee River to rescue the dog while others stood on the shore to monitor their rescue efforts. The scared dog, however, was reluctant to be rescued and kept moving away from rescuers as they crawled through debris.

At one point the dog jumped into the river in an attempt to get away from his rescuers, unsure of their motives. As they near the dog at one point, the dog becomes sandwiched between two ice barges. After several attempts to rescue the scared dog, the rescuers brought it safely to land, pulling her up in a yellow rescue tote.

After the dog was rescued, he was taken to the Milwaukee Animal Control and picked up by his owners. The rescue mission showed the power of teamwork, perseverance and helping others at all costs, despite the amount of work it may take.