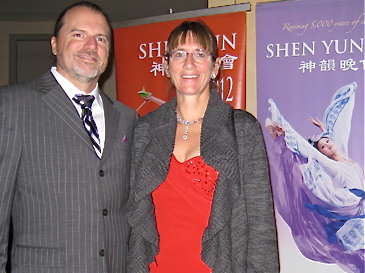 Mr. Tim Powell, an Emmy award-winning filmmaker and a professor of film and television production at the San Diego State University, attends the opening performance of Shen Yun Performing Arts at the California Center for the Arts on Friday Dec. 28, 2012. (Sophia Fang/The Epoch Times)
News

ESCONDIDO, Calif.—Tim Powell, an internationally recognized filmmaker and a professor of film and television production at the San Diego State University, watched the opening performance of Shen Yun Performing Arts at the California Center for the Arts on Friday Dec. 28.

Mr. Powell, who won an Emmy award for his historical documentary film “Coronado: Building a Dream” and has won a number of other awards, said he enjoyed the “cultural experience” of watching Shen Yun.

“I liked the international field,” he said.

Based in New York, Shen Yun Performing Arts was established in 2006 with a mission to revive 5,000 years of divinely inspired Chinese culture

The classical Chinese dance and music company features a collection of short pieces, taking the audience from the Himalayas to tropical lake-filled regions, and from the legends of the culture’s creation thousands of years ago to modern times in China.

“[I liked] the way the story is woven into the … classical dance,” Mr. Powell said.

He also praised the talented dancers and said he enjoyed the digital backdrops used throughout the performance.

With state-of-the-art graphics technology, these backdrops create vividly animated settings and transport the audience to another world.

“I like how there is action between the background and the … live performers,” Mr. Powell said.

Shen Yun Performing Arts Touring Company will be in Escondido for performances at the California Center for the Arts through Dec. 31.