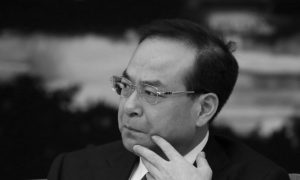 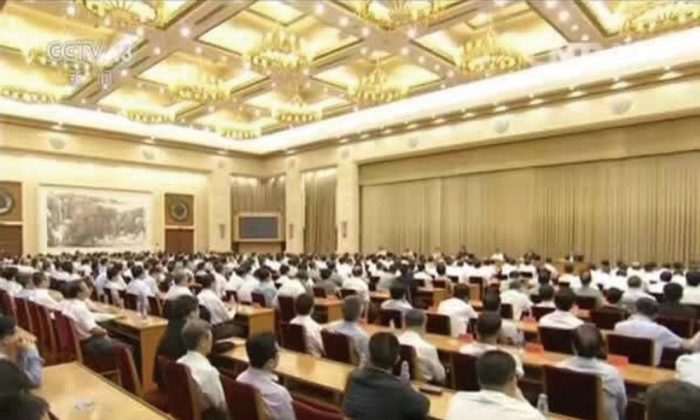 Party officials gathered in Beijing for an emergency meeting on July 26 and 27. (CCTV)
China

Days before top sitting and retired leaders of the Chinese regime headed off to Beidaihe to enjoy the resort and discuss political arrangements, hundreds of officials from all over the country were summoned to Beijing for an emergency meeting in a special hotel that hosts political conferences.

From July 26 to July 27, around 300 provincial-level officials, military generals and Party elders gathered in the high-security Jingxi Hotel to study a keynote speech by Xi Jinping.

“Xiakedao,” an official WeChat account of the overseas version of the People’s Daily, declared the meeting “the most important high-level meeting ahead of the 19th Congress.” The article headline reads: “Great things have finally come to pass.”

In his speech, Xi summarized various accomplishments over the past five years, and noted major risks lying in economic, political and social sectors. “Many long-unresolved challenges have been solved, and many major, yet long-unfinished legacies established,” he said, according to the article.

It has been customary for high officials to meet up and set the tone for the upcoming Party congress, which will finalize the top leadership structure for the next five years. But the meeting this year seemed to be curiously secretive. Snapshots from China Central Television, the state television broadcaster, reveal a group of solemn officials sitting upright behind a spotless table devoid of notebooks, pens, or even cups for water—a stark contrast to the typical scene of hunchbacked notetaking.

According to Ming Chu-cheng, head of National Taiwan University’s political science department, the last time a secret Party meeting was held under similar circumstances came soon after Lin Biao, China’s top military commander and a designated successor to Mao Zedong, died in a plane crash when fleeing to the Soviet Union.

Hu Ping, chief editor of the overseas magazine Beijing Spring, believes that Xi convened the conference to further consolidate power. He notes that the timing of the conference was close to the purge of prominent Chongqing official Sun Zhengcai, on July 24.

Xi, Hu said, might have wanted to provide some explanation for the recent political reshuffling and rally the Party around him.

Sun Zhengcai was the youngest member of the Politburo and headed the municipality of Chongqing in Southwest China. Similar to Lin Biao, Sun was promoted as the most promising candidate to succeed Xi as the next Communist Party leader, before he was suddenly removed from his post on July 15. In a little over a week, he was investigated for corruption.

Chinese experts have seen the ousting of Sun as a move for Xi to secure his power, as shown by the scores of officials who immediately demonstrated their loyalty to the Party following Sun’s downfall.

“Everyone has to make their position known,” Hu said.

Bo, the disgraced Chongqing Party chief, and Zhou, the former head of the regime’s national security, were sentenced to life in prison for corruption in 2013 and 2015 respectively.

“Regardless of position, experience or accomplishments, no one is immune from serious investigation and punishment for violating party discipline and the law,” the article said. “No one should take any chances.”

Zang Shan, a veteran journalist based in Hong Kong, believes that the timing of the meeting before the Beidaihe meetings portends trouble for rival Party elders who are still at large. ‘It is not inconceivable that Xi Jinping will take measures against Zeng Qinghong or Jiang Zemin,” Zang told the Epoch Times. “Something should happen in the next two or three weeks.”

The choice of the conference was also noteworthy. Unlike in the previous years when similar conferences were commonly held in the Party School of the Central Committee, Xi chose to hold it in the heavily guarded Jingxi Hotel, a conference hall reserved exclusively for the top political conferences.

The Party School, meanwhile, is headed by Liu Yunshan, an ally of Jiang Zemin and alongside Xi Jinping a member of the seven-man Politburo Standing Committee.